It was a stellar performance day for the T.R. Miller Cross Country teams Saturday was they competed for a state time in Cullman. The girls finished third overall, while the boys earned a sixth place finish.

“These are probably the best teams I’ve ever coached here at TRM, and (Saturday’s) results proved how hard these athletes have worked all season,” Atkinson said. “The girls had an outstanding day, coming in third. And our boys, to finish sixth in their group, all of that is something to be very proud of.” 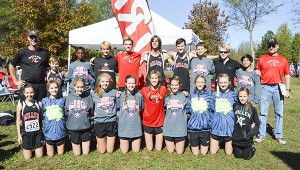 The TRM cross country teams and coaches after the races Saturday.

Members of the girls’ team came across the finish line in less than 24 minutes, Atkinson said.

“This is a young team, and I am excited to see what next year holds,” he said.

“And that goes to show you how close the boys race is,” Atkinson said. “This is the first time we’ve taken a boys’ team to state in a number of years because competition is tough.

”(Carlson) has had tremendous year for us, but this boys’ team is young, too,” he said. “We’ve got some athletes that are coming up, so I’m expecting great things from them in the future as well.”