The W.S. Neal Lady Eagles will begin their season Nov. 16 against Pensacola Catholic. The team will have three returning seniors, nine sophomores, two juniors and one freshman.

Head coach Dewan Salter is in his first year as coach of the girls’ team after the sudden departure of former head coach Stuart Powell earlier this year. Salter said he is still in the process of learning his team. 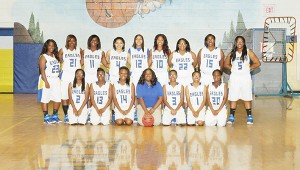 “These girls have been together for a while,” Salter said. “They have played a lot of basketball. They played some summer ball in West Florida this year, but it hurts them a bit because I have changed up some of the things they are used to doing.

“I haven’t had a lot of time with them, but they are starting to catch on.”

Leading the team will be senior Keke Floyd. Salter says Floyd will do multiple things this season. “She’s really talented. She attacks the goal and plays defense well.  She’ll handle the ball for us at times. She’ll play some point for us and play on the wing because she attacks the goal so well.”

Salter said sophomore Marisha Frasier will see time at the center position. “She ‘s pretty physical and I think she’ll do a good job inside for us,” he said.

Sophomore Jashira Dees will see some time at the power forward position.

“I’m still sorting and getting a feel for the team,” Salter said. “ I’m looking for good things out them this season.”

The W.S. Neal Eagles basketball team will begin their season Nov. 20 against Pensacola Christian. The team will have 10 returning seniors, four juniors and one sophomore.

Head coach Dewan Salter is entering his second year as head coach and has high expectations for his experienced squad. 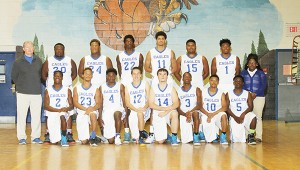 “Being my second year in (the position), I feel a little bit better than I did last year, “ Salter said.

“We still got a long ways to go, but this is a real athletic bunch,” he said. “A lot of people are looking for good things out of them. I’m taking it day by day to see how things go.”

Leading the Eagles will be senior Tyshawn Davis. Davis had a breakout season last year including a 46-point game performance.

“We got  a lot of speed of course with Malcolm and Quenton,” said Salter. “I’m looking for big things out of (Tolbert). He’s 6-foot-5 and has come a long way from last year. Dalton is going to play some four and some three for us.  He can shoot, play defense and rebound well. Troy shoots the three real well. He also handles the ball well. Treylon is our main point guard.”

Salter says with his athletic team he looks to run a quick tempo offense and press on defense with a two-team rotation.

We got a lot of speed on the team,” he said. “I want to be able to run two different groups out there so when we need to press we can press. When we need to attack, we can attack.”

The Eagles finished last season 14-11, one win shy of the 15 win total of the four prior seasons.