Being truly thankful for it all 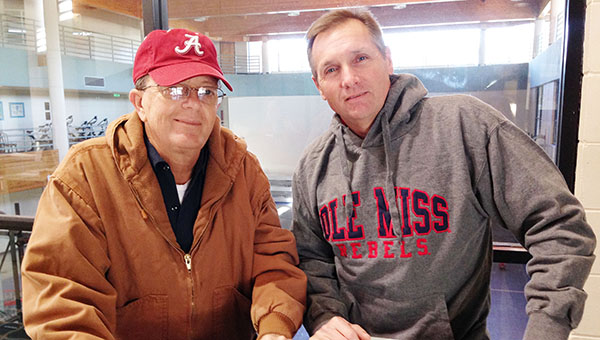 Stephanie Nelson | The Brewton Standard
Keith Miller and Steven Dickey, coworkers at the Brewton YMCA, share more than a work bond. Dickey’s donation of a healthy kidney has given Miller a new lease on life.

What would you give up for a coworker? If you’re Steven Dickey, the answer is a kidney.

When the world celebrates Thanksgiving Thursday, Keith Miller and his family will be thanking the Lord for May 28 – or “Kidney Day” as it’s known around their house.

Miller, the Brewton YMCA’s all-around handyman, has battled polycystic kidney disease since he was 17. He never let the disease stop him. He joined the Army, fought in war, provided for his family and experienced all life had to offer. That is until he couldn’t do those things any more.

“I was about 40, and I had gone to the doctor to get a check up,” he said. “My blood work came back with some issues. Then, things just progressed,” Miller said. “I knew I had to do something different if I wanted to be around.”

He began dialysis in 2012.  For nearly three years, Miller spent four hours a day, three days a week, at the dialysis center. Knowing that wasn’t how he wanted to spend the rest of his life, Miller asked for a spot on the transplant list. Because of his condition, he was given a prime spot, but it came with a catch. He had to give up a kidney to get a new one.

In June 2013, he did just that, but doctors were frank in their opinion – without the new kidney, he would face a life of dialysis.

The family began the process of locating a match. Friends and family alike volunteered, but it was to no avail.

Until the day in 2014 that Dickey – Miller’s boss and Brewton YMCA executive director – casually mentioned it.

“I felt it laid on my heart,” Dickey said of the offer. “I thought, ‘Here is this man who needs my help. I need to do this.’

At first, Miller thought it was an offer made in passing. But then, things got real, fast.

“He was serious,” Miller said of Dickey’s offer. “Before we knew it, there were tests done and then, we had a date.”

The procedure, while huge in implication, was relatively small, Dickey said.

“I think I was out of work a week, maybe,” he said. “When I thought about what I could do to help someone – someone like Keith – (the donation) wasn’t a hard decision to make.”

Recovery for Miller is still an ongoing process. He must avoid strenuous labor, heat and harsh sunlight.

When asked why he believed Dickey volunteered for the procedure, he jokingly said, “Guess he thought I was gonna croak down here.

“I guess God compelled him,” Miller said. “Not everybody can or will give a kidney. It’s a gift that can’t be repaid. I’ve thanked him, but it doesn’t seem adequate.”