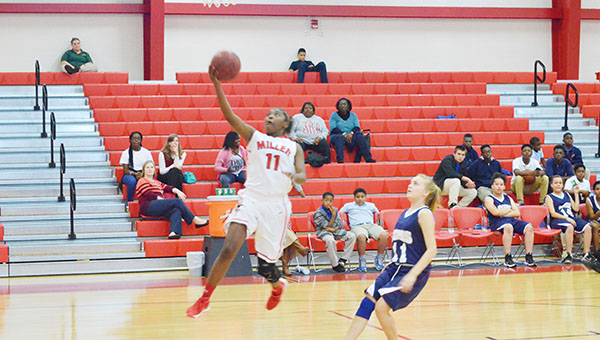 BMS’s Aleria Smith goes up for a layup.

The BMS girls defeated Castleberry 57-10 to improve their record to 10-0 for the season. The team went on a tear in the first quarter, outscoring their opponent 20-1.

Scorers for BMS were Janazsia Nettles, who led the team with 21 points; Aleria Smith with 19 points; Raivon Ewing with eight points; Alijah Fountain with five points and Shania Samuel with four points.

For the boys, the game was tied 18-18 going into overtime. Castleberry started quick knocking down a three pointer on their first possession. BMS made a free throw to follow to make the score 19-21 before a made layup by Castleberry extended their lead 19-23. BMS’s Jamal Duggans would draw his team closer after a made bucket and free throw. BMS had a chance to take the lead on a face break layup but a mishap at the basket kept the score the same. With BMS down 22-23, BMS would commit a foul. Castleberry made both free throws to extend their lead to three. Down the stretch Castleberry went 5-7 from the line with BMS going 0-2.  After the lost the BMS boys record is 3-7.

The BMS girls defeated Jay 33-1 to improve to 8-0. The lone point for Jay was scored in the first quarter. Leading BMS was Aleria Smith with 19 points and Janazsia Nettles with nine points.

All WSN basketball teams begin with wins; head next…