The Jefferson Davis Community College basketball team is still winless this season after losing to Marion Military 53-80 on Saturday. JDCC went into the half down 28-35. Marion Military outscored JDCC in the second half 45-25. 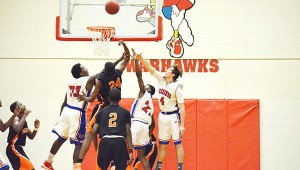 JDCC players scramble for a rebound against Marion Military.

JDCC will look for their first win Dec. 3 against Lawson. The game will be played at 7:30 p.m. at JDCC.

On Thurs., the JDCC Warhawks lost to Huntingdon College, 53-62. The Warhawks had a troubling first half going into the locker room down 24-34. The team would have a better second half outscoring Huntingdon 29-28, but still find themselves in too much of a deficit to overcome.

Leading the Warhawks were Keonta Edwards with 15 points, five rebounds and one steal; and Jerry Aaron with 12 points, seven rebounds and two steals.