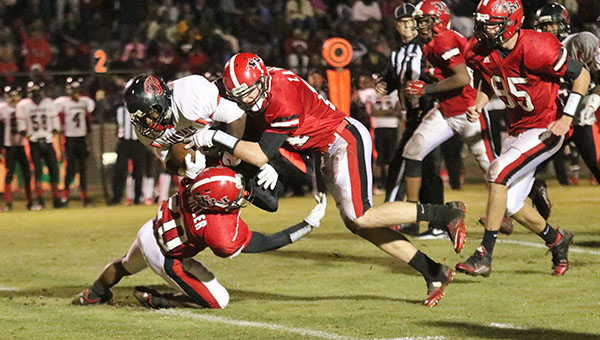 Allison Terrell | The Brewton Standard
Tigers use teamwork to bring down a HIllcrest runner.

In a game with much hype, much grit, and much determination from both teams, the T.R. Miller Tigers saw their season end, losing to the Hillcrest Evergreen Jaguars 22-25.

“We played as hard as we could play,” said TRM head coach Jamie Riggs. “It was a great game. (Hillcrest) made some plays in the second half. A few more than we did. We turned the ball over to them some and you can’t do that.

“We’ve played a lot of these games this year,” he said.”It could’ve gone either way. It didn’t go our way but (Hillcrest) played a great game. I congratulate them. They had a great victory tonight.”

The Tigers were first to get on the scoreboard. With 3:15 to go in the first quarter TRM quarterback Caleb Winton found senior Chardian Johnson in the middle of the field for a 26-yard touchdown. Tiger kicker Hunter Brittain added the extra point to give TRM the lead 7-0.

With 9:23 left in the second, Hillcrest would answer with a score of its own when junior quarterback Jamichael King hooked up with 6-3 senior Javarious Betts for a 26-yard catch in the end zone. Hillcrest would miss the extra point. Tigers led 7-6.

Hillcrest would get the ball back quickly after an interception on defense. The Jaguars began their drive on their own 41. On the drive, Hillcrest marched inside the Tigers 20.

Looking to put it in the end zone Hillcrest’s King made an attempt to find a receiver for the touchdown but would have the pass intercepted by the Tiger’s Johnson.

It seemed only fitting that Johnson would get the Tiger offense back on the field.With the Tigers threatening to score on the ensuing drive, Winton found Johnson in the back of the end zone for a nine yard touchdown, Johnson’s second touchdown catch of the game.  Brittain added the extra point sending the game into halftime with the Tigers leading 14-6. 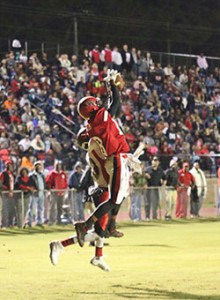 Allison Terrell | The Brewton Standard
TRM wide receiver Chardian Johnson makes a catch in the end zone for the touchdown.

With 2:44 left to go in the third quarter Hillcrest’s King found senior wide receiver Tyrell Riley for a 28-yard touchdown. Hillcrest elected to go for the two-point conversion but fail. The Tiger’s lead was now 14-12.

In the fourth quarter Hillcrest took its first lead of the game when kicker Rajos Smith knocked down a 31-yard field goal. Hillcrest led 15-14.

The celebration was short lived when the Tigers hit them with two big passing plays. Winton found senior running back Markial Mitchell for a pass to the outside. After making a few Jaguar defenders miss Mitchell gained 26 yards.

The next play Winton found his favorite target Johnson for a 30-yard gain. Senior Ahmaud Taylor capped off the quick drive with a two-yard run up the middle for a touchdown. The Tigers opted to go for two points. The Tigers were successful and took the lead back, 22-15.

Hillcrest began the following drive on the Tigers 47.  With 3:01 on the clock, King found sophomore Davin Spears in the end zone for a touchdown. Hillcrest was good on the extra point, tying the game up 22-22.

After the kickoff the Tiger offense got the ball on its own 21. On the first play Winton stepped back to find a receiver down the sideline, but Hillcrest’s Riley would intercept the pass.

The interception gave Hillcrest’s offense the ball back with 1:44 left on the clock on its own 37. The offense would do its job driving inside the Tiger’s 20-yard line to set up a field goal attempt.

Smith, who made a big kick earlier for Hillcrest to tie the game up, would answer the call again with a 17-yard field goal.

The field goal gave the Jaguars the go-ahead lead, 25-22 with only a few seconds left on the clock. The Tigers would run out the clock’s remaining seconds with a trick play to end the game.

With the loss Riggs said its tough to see the good that came of his team’s season but believes his team should be proud of the strides they made from week one to this point.

“We won 10 games so it was a great season,” Riggs said. “I’m sorry we didn’t get to move on from here, but I think when we look back at it we’ll be proud of some things we accomplished this year.”

Leading the Tigers was Chardian Johnson with six catches for 97 yards and two touchdowns on offense and an interception on defense; Markail Mitchell with 18 carries for 120 yards; and Ahmaud Taylor with 19 carries for 68 yards and a touchdown.