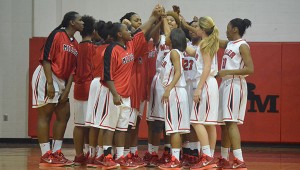 The T.R. Miller Lady Tigers gather prior to a game last season.

In a game that was close going into halftime 28-23, the Lady Tigers took their five point lead and went on a tear in the second half, outscoring Maclay 26-12.

TRM got off to a slow start trailing Niceville 13-17 at the end of the first quarter. The Lady Tigers would make up ground going into halftime with the lead 29-24. With the score tied 38-38 at the end of three, Niceville closed out the final quarter strong outscoring TRM 10-5, handing the Lady Tigers their first loss of the season.

Leading TRM was Mekhia Williams with 23 points, six rebounds and three steals; and Steely Ruzic with 13 points, one rebound and two steals.

The Lady Tigers trailed West Hall by 16 points going into the fourth quarter.

Despite outscoring West Hall 12-7 in the final quarter, TRM was unable to mount a comeback.

Leading TRM was Mekhia Williams with 19 points, four rebounds and four assists; and Kyla Bell with seven points and 10 rebounds.

TRM basketball will be in action on Dec. 7 against Bayside. Games begin at 4:30 p.m. with the B-team, followed by the varsity girls at 6 p.m. and varsity boys at 7p.m.