The BMS girls and boys picked up wins this past Thurs. against Repton.

In the girl’s game, Repton was yet another victim on BMS’s hot streak. Miller led at the half 39-4. Miller would hold Repton to only three points in the second half, winning the game 58-7. 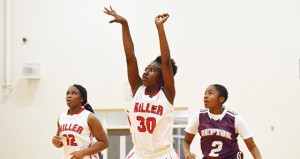 BMS’s No. 30 Alijah Fountain watches a shot throw the basket in the girls 54-7 win over Repton.

For the boys, BMS was down 13-21 going into the fourth quarter. Miller would go on a 10-0 run in the fourth. Miller would take its first lead, 23-21, with 18 seconds left on the clock. Repton tied the game up after a BMS turnover, 23-23. While bringing the ball up court Miller’s Cameron Knapp was fouled. It was a moment of redemption for Knapp who turned the ball over, leading to the tying basket by Repton. Knapp made one of two from the line to give BMS the lead 24-23. The free throw would prove enough to seal the victory for Miller.