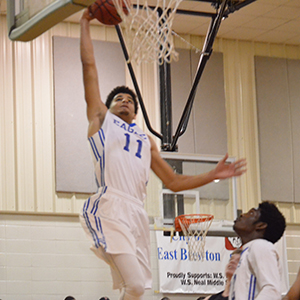 No. 11 Tyshawn Davis goes up for a dunk.

Leading WSN were Mateo Smith with 12 points and Marvin Maddox with 10 points.

For the Lady Eagles it would be a dominant first and fourth quarter to make the difference in the game. WSN held Pensacola Catholic scoreless in the first and outscored them 15-7 to close out the game for a final score of 34-30.

WSN Neal varsity dominated Pensacola Christian in every quarter of the game, with a game high 19 points in the third quarter. WSN would win by double-digits, 56-35.

JDCC merger to include 3 others?