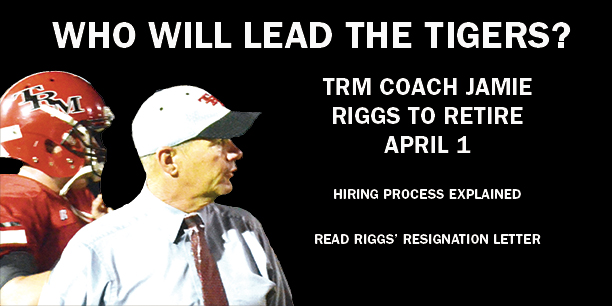 There could be a new T.R. Miller head football coach and athletic director in place by January.

News of longtime Tiger coach Jamie Riggs broke Monday, who said he will end his 38-year coaching career on April 1.

Riggs ended the 2015 season with a fourth-round appearance in the 2105 state playoffs and an impressive 305 career wins – an accomplishment that marks him as the third winning-est high school football coach in Alabama.

Brewton City Schools Superintendent Dr. Kenneth Varner said the job will be listed immediately and run through the Christmas break. Response, he believes, will be overwhelming.

“We’ll start sorting those applications in January, but we don’t have a definitive deadline for filling the position because it’s more important that we get it right,” Varner said. “From a practical standpoint, we would like to have someone in place in time to conduct spring practice.”

Spring practice typically begins in February; however, Riggs, who also teaches physical education, said that date will now be up to the new coach/athletic director. But in the meantime, Riggs will be on board to help with the transition process.

“Most of my job (until April) will be the transition to the new coach, to help him in anyway I can with football and athletics,” Riggs said.

“It’s my interest to see T.R. Miller go on to be successful in as many things as we can.”

Varner said the board is currently developing a hiring process that will allow for “input from multiple sources and perspectives.”

“Candidates chosen for interviews will have the opportunity to answer interview questions with the administration, talk football with some of our coaches, and tour our facilities,” Varner said. “Ultimately, the school administration will make a recommendation to me that I can present to the board.

“’I’m confident that the right pieces will fall into place, and we will all be on the same page at that point,” he said. “Whoever the next coach is, he will have some big shoes to fill.”

And that’s going to take someone who is organized and has the ability to handle stress, Riggs said.

“(At Miller) I think your ability to inspire and motivate players is a big deal,” he said. “We have a great tradition here. A lot of our players grow up wanting to play for T.R. Miller. So there is an emotional side – and that part is instilled so it will help us in (team development for) years to come.”