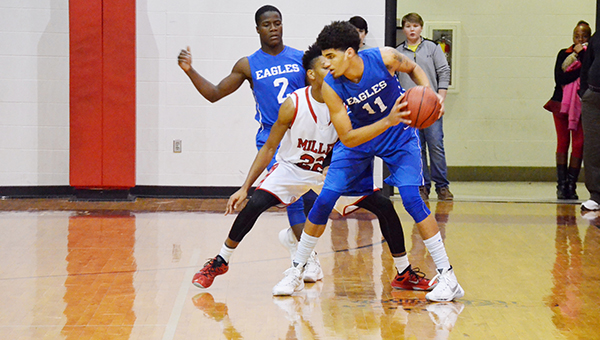 The varsity T.R. Miller girls and W.S. Neal boys each defeated their respected rivals for the second time this season.

The Tigers put the pressure on Neal early, scoring seventeen first quarter points. By halftime TRM was up 26-12. Miller would outscore Neal 17-12 to get their third win of the season.

This win was a team effort,” said TRM B-team  head coach Marc Edge. “It started with defense and rebounding and we gave up very few second chance points.”

Leading WSN in scoring were Marvin Maddox with nine points and Ricky Samuel with four points.

Leading TRM in scoring were Demonte Jenkins with 13 points and Micah Flores with seven points.

At halftime TRM would lead 23-17. The Lady Tigers would go on a 5-0 run to begin the third quarter. The Lady Eagles would score their first bucket of the half with 3:40 left to go in the third. 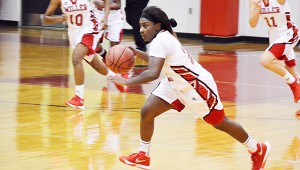 After a three-pointer and layup by Janazsia Nettles, TRM extended their lead 37-19. By the end of three, TRM led 40-20.

The fourth quarter was all Miller, who outscored Neal 16-9 to close out the game.

The Lady Eagles are 4-7 this season.

Neal led most of the first half. Miller’s Markail Mitchell kept the Tigers close behind some timely three- point shooting. Mitchell would give the Tigers a 28-26 lead with a three-pointer from the corner. With the second quarter winding down, Neal’s Tyshawn Davis found guard Malcolm Hawthorne with a pass for an easy layup to tie the game 28-28 at the half.

Neal’s Troy Lewis gave his team a 34-30 lead after back-to-back three pointers. After a couple bucket exchanges on both sides, Lewis proved to have the hot hand connecting for another three.

With next trip down the floor, Miller’s Chardian Johnson connected on a three-pointer of his own to make the score 43-39 in favor of Neal. Davis answered on the next trip for Neal with a three pointer. Johnson answered again with another three for Miller.

With electricity from the crowd at its height during the game, Neal’s Davis would catch a pass in open court and take it to the basket for the one handed dunk. Four more Neal baskets would open the score gap in the third. Miller was outscored 27-13 by Neal in the third quarter.

Both teams would score 15 points in fourth quarter.

The win is Neal’s second over the Tigers this season.

Leading WSN were Tyshawn Davis with 26 points and seven rebounds, Troy Lewis with 18 points and five rebounds; and Darius Tolbert with seven points and a season high, 20 rebounds.

After the loss the Tigers are 3-3 for the season.

With the win the Eagles improve to 9-4.

TRM will compete in the Red Level Christmas Tournament in Red Level on Dec. 26,28 and 29. Game times TBA.