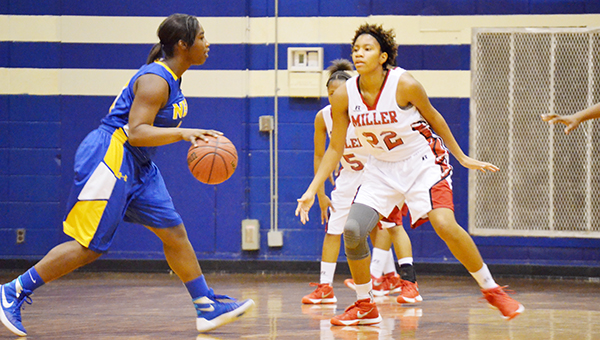 The T.R. Miller varsity girls and boys picked up tough wins against Straughn at home and wins on the road against Clarke County in Grove Hill.

It would take an overtime effort for Miller to pull out the win against Straughn. Led by Mekhia Williams’s five points, Miller outscored Straughn 8-3 in overtime.

After a shaky first quarter, TRM rebounded outscoring Straughn 15-8 in the second to take a 22-19 lead into halftime.

In the fourth quarter with 1:11 left to play and the score 44-41 in favor of Miller, Straughn had an opportunity to tie the game. Straughn was unable to capitalize on the Miller turnover, by missing  a layup. TRM would knock down a free throw and senior Austin Holmes would make a layup to seal the win. 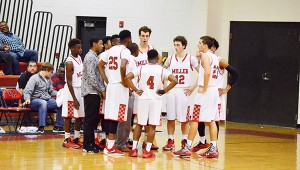 The Tigers huddle up during a timeout.

“We did somethings really well tonight,” Johnson said. I’m proud of our guys for continuing to improve as the season moves along.”

TRM committed only six turnovers, the team’s best so far this season.

TRM trailed Clarke County 26-29 at halftime. The Lady Tigers would rebound with a good third quarter outscoring the Lady Bulldogs 14-10 to take the 40-39 lead into the fourth. TRM would outscore Clark County 11-8 in the fourth to get the victory.

The Lady Tigers are 8-3 this season. The team is on a six game winning streak.

Miller took a 24-21 lead into the third quarter.  TRM had one of their best scoring quarters in the third, outscoring Clarke County 13-10. Both teams were able to play solid defense in the fourth. The Tigers would outscore the Bulldogs 6-4 to close out the game.

“To go on the road and pick up a victory is really big,” said TRM head coach Juan Johnson. “We are beginning to find ways to play consistent on both ends of the floor.

“We want to be playing great basketball by the end of January and today’s victory was  a stepping stone towards that.”

Leading TRM was Chardian Johnson with 15 points; and Brooks Brown and Ahmaud Taylor, both with eight points.

The Tigers had one of their most efficient shooting nights, shooting 42 percent from the field to tie their best since their victory over Bayside Academy on Dec. 7.

The Tigers are 5-3 for the season.