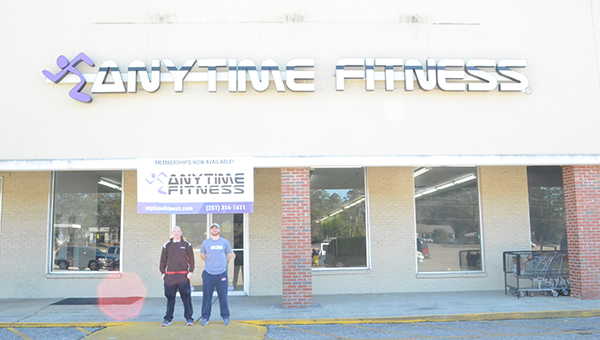 Corey Williams | The Brewton Standard
The brothers outside Anytime Fitness. The fitness center is scheduled to open Jan. 20th.

The city of Brewton will welcome a new fitness center when Anytime Fitness opens its doors on Jan. 20.

Brothers Mark, Nathan and Joel Ward are excited by the new center and the chance to bring a branch to the Brewton community.

“We’re excited about being here,” Mark Ward said. “We’re offering something that will give members a chance to really get all their fitness needs in one place. “

The brothers are originally from Mississippi, and own Anytime Fitness centers in West Point and Fulton. Mark Ward will serve as general manager of the Brewton branch.

“When we’re looking at markets we want to offer a service people don’t already have,” Ward said. “It’s something new and neat. We really think this is going to be nice.” 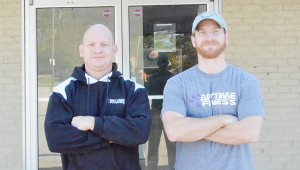 Anytime Fitness is not a crossfit affiliate but will feature a section dedicated to crossfit training, a cardio area, multipurpose room and free weight training area.

Pull up bars and a drop bar section for Olympic lifting will be featured in the crossfit area, as well as ropes on both sides, one for women and one for men. The area will also have jump boxes, kettle bells and row machines

In the cardio area will be treadmills, ellipticals, bikes and a power mill. Televisions will be installed in the cardio machines where you can plug up your headphones to listen and watch while working out.

The multipurpose room will be used for classes. A kiosk displayed outside the room will have over 300 virtual classes. Members can choose from any of those classes 24-hours a day.

“A screen will come down in the room,” Ward said. “You’ll have an instructor live to teach. Right now classes will be virtual, but in the next couple of months as membership grows we’ll add actual live classes. So we’re going to be looking for instructors as we go along.”

The free weight training area will feature benches and dumbbells from five to 500 pound.

The fitness center will have three bathrooms. Each bathroom will have a shower.  There will be two tanning beds and a personal trainer’s office. A room set for a hydromassage bed will be installed in the future.

Sixteen cameras will be installed for security purposes. Doors automatically will lock when closed. Members will use their key to get access to the center, which is open 24 hours a day, seven days a week. There will be a necklace option for members who like to workout late or early during the night. A button on the necklace can be pushed for an emergency, which will notify the police automatically.

“Some people have different schedules and do want to workout late or as early as two in the morning,” Ward said. “They have the ability to wear the necklace to press and notify the police.”

After thirty days as a member at the location, members will be able to have access to other Anytime Fitness establishments throughout the world. Currently there are over 2,200 clubs in North America and more than 800 across the globe.

Up through Jan. 18, Anytime Fitness is holding a pre-opening special with a $0 enrollment fee and no monthly payment until the first month after opening.

Ward said he is settling into the Brewton lifestyle.

“My brothers and myself are from a small town, so the feel of community resonates with us,” he said. “That’s important to us. You get to really know the people and community and that’s a huge upside.

“In a big city it’s tough to make those same connections. We really think this is going to be nice and we hope that the people in Brewton will like it.”