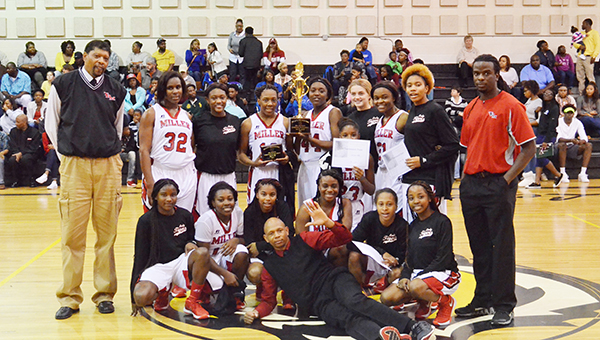 Corey Williams | The Brewton Standard
The TRM Lady Tigers pose with the championship trophy after their clinching win versus Dothan.

Lady Tiger head coach Ron Jackson said his team played exceptionally well and believes they have the opportunity to be one of the best defensive teams he has coached in quite awhile.

“We played exceptionally well, especially on defense in our full court press. Mekhia (Williams), Steely (Ruzic), Kyla (Bell), Mykayla (Harrison), Morgan (Longmire) and Janazsia (Nettles) stepped up for us. I think this is the best one-on-one and full court pressure team I’ve had since 2009. We’re not quite there yet, but we’ll get there.”

TRM got off to a quick start. In the second quarter guard Emonea Curry would hit a shot at the top of the key to give Miller a 23-16 lead. On the next play, Miller’s Ruzic would take a fast break layup to the basket for the make. On her landing she sustained an injury and was unable to return for the remainder of the game. Williams would make one more shot for Miller to give the Lady Tigers a 27-16 lead at the half.

TRM kept the defensive pressure up in the third, forcing Dothan to make multiple turnovers, which lead to points on the offensive end.for Miller.The Lady Tigers outscored Dothan 38-27 in the second half.

Leading the Tigers in the win was Mekhia Williams with 34 points, five rebounds and five steals. 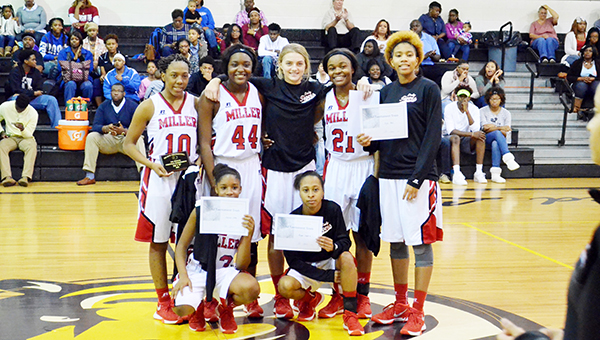 The Lady Tigers are 11-3 this season. They are currently on a nine game winning streak as of Jan. 4.