A plan was revealed Monday to bring a Hilton-or-Marriot-style, or tier 1, hotel to Brewton.

The brainchild of KSH Leva Hospitality Group of Monroeville, the project – if brought to fruition – would construct a 65-plus-room facility with a pool and fitness room and meeting room, as well as a number of other amenities.

The company has narrowed the brands to three – Marriot, Intercontinental Hotel Group and Hilton. However, the company is asking the city for a number of things – to acquire the property across from Wal-Mart and install the necessary utility infrastructure; a 10-year tax abatement for property, municipal and associated taxes; and a five-year non-compete agreement barring any new hotel. 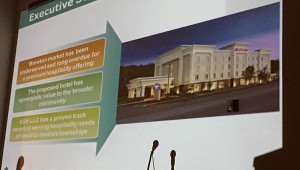 A powerpoint presentation given Monday outlined the company’s plan for a new tier 1 hotel in Brewton.

The reasons their company believes Brewton is a fit for their next project are many, Hi Leva said.

For nearly two years, and in conjunction with city government, Leva said the company has studied the economic makeup of Brewton. Monday he described how they could construct what they considered a “world-class project in Brewton.”

“We have spent a lot of time and money in this proposal and plan,” Leva said. “It’s not without risks. We don’t want people to walk away thinking there will be a property in six to nine months; however, we think that Brewton is ripe for a number of reasons.

“This area has been severely underserved and is long overdue for a premium hotel offering from a large international chain,” Leva said. “The market conditions are ripe; the community is deep in history and Brewton has a place on the map of Alabama.

“We foresee economic growth in this area and believe a property would accelerate that,” he said.

Mayor Yank Lovelace said the project has been “in the works for a while” and the city’s economic development director is working to obtain a number of federal and state programs to expand the project.

It is expected the new hotel will bring 10-15 new jobs, Leva said.

Even though the city’s previous hotel survey said Brewton couldn’t support a facility of this type, Leva said he and his company believes in the project.

“We think the presence of a hotel, in the long run, will be successful,” he said. “It will bring traffic, divert it from the interstate and have Brewton as a stopping point on the way to the beach. So we’re asking for help in planning, development and launching.”