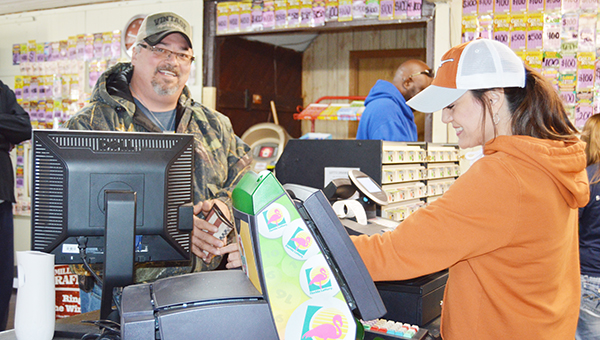 With an estimated $1.5 billion Powerball jackpot up for grabs, business is booming at R&R State Line Lotto.

Owned by the Joyner family of Brewton, the small convenience store located six miles from the city limits specializes in lottery tickets, drinks and snacks and continues to experience a steady stream of customers – some as far away as north Alabama.

“You should have seen this parking lot Saturday,” said Rhett Joyner. “At one point, there were 57 cars and people were blocked in.”

On Monday, the site was just as popular as weekend ticket holders and new billionaire-hopefuls lined up in front of the store’s two cash registers.

“It’s insane,” said cashier Ronnda Rogers. “Saturday was crazy; it was like a frenzy, and I bet Wednesday will be even worse.”

The store, which is located just over the Alabama state line, is no stranger to winning. Walls are lined with “small pot wins” of $100 or more. Several years ago, a local bought a $110,000 winning ticket, said original store owner Lyvon McNaughton. Monday, “Mr. Mack,” as he’s known to locals, donned a reflective vest to help handle the crowd.

“It does my heart good to see this parking lot full,” McNaughton said of the store opened by his father in 1932. “I started running this place in 1946, and I can remember when we started the lottery, there were Greyhound buses parked from the top of the hill past the state line.”

Some $10,000 in local scratch off winners were also made Saturday, Joyner said.

Florida is one of 44 states, plus Washington D.C. and two U.S. territories, that participate in Powerball.

While the $1.3 billion is by far the largest ever up for grabs in North America, Spain’s latest elGordo lottery, or “The Fat One,” had a prize pool of $2.4 billion prize. But it was awarded to thousands of ticketholders, elGordo’s website said. Powerball’s riches could go to a single ticketholder.

Powerball’s grand prize has increased steadily for weeks after repeated drawings produced no big winners. But last week ticket purchases surged, driving up the size of the pot.

And the excitement is only expected to grow ahead of the next drawing, Joyner said.

“We all know you can’t win if you don’t play,” Joyner said. “I expect we’ll see an even bigger number of tickets sold by the time the drawing comes around Wednesday.”