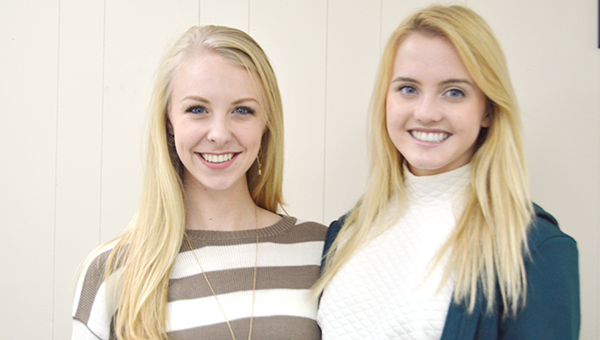 Two T.R. Miller seniors are working hard this week as they represent Escambia and Clarke counties in the 2016 Distinguished Young Women of Alabama scholarship competition.

Participants will compete for more than $41,000 in cash scholarships and more than $2 million in college-granted scholarships – as well as an opportunity to represent Alabama in June’s national competition.

Manning and Perkins are among the 52 young women who will be evaluated in five categories – scholastics, interview, fitness, self-expression and talent.

Both girls are dancers who said they have enjoyed their time as the counties’ DYW.

The girls arrived in Montgomery on Jan. 8 and have spent the days practicing and enjoying time with their host families and at community venues.

The weekend was spent getting to know their host families and working to polish their Friday and Saturday night performances. On Friday, the two girls – along with the other 53 contestants – will compete in the competition’s preliminary categories. The Saturday competition will start x p.m. with the remainder of the prelim categories before the top eight contestants are named.

The girls agreed community support has been tremendous during the competition.

“This program is a great way to expand your horizons,” Perkins said. “You get to meet so many new people. For me, seeing the community show up to help in any way possible has been amazing.”

Fitness – where girls must compete in a timed physical routine – is one of the most feared categories.

“That’s the one I’m most worried about,” Manning said. “You’ve got to get through it and look pretty the whole time.”

Thankfully, the routine was sent via email so the girls had extra time to practice, they said.

“But not the music,” they said together.

The two-day competition begins on Friday at 7:30 p.m. and will conclude Saturday at 1:30 p.m. at Montgomery’s Frazier United Methodist Church.