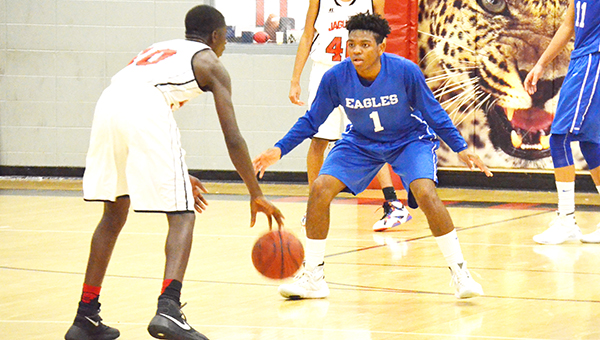 W.S. Neal was in action on Thursday night against Hillcrest, with Neal girls losing and the boys picking up a win.

The Lady Eagles were outmatched in a one sided game against Hillcrest. Hillcrest dominated the first quarter outscoring Neal, 21-8. The Lady Jaguars outscored Neal 17-9 in the second half to get the win.

Leading Neal was Keke Floyd with 12 points and six rebounds.

There was a lot of energy in the building with some competitive jarring back and forth from both teams from the tip-off.

Neal got off to a quick 5-0 start, with buckets by Treylon Watson.

Hillcrest was able to get on the board with a three pointer by Kobe Bradley.

Neal would have the upper hand throughout the first quarter until three minutes left when Hillcrest would go on a 6-0 run. Neal closed the quarter on a three-pointer by Troy Lewis and layup at the basket by Tyshawn Davis.

The second quarter would be played close by both teams, with Hillcrest outscoring Neal 11-10. Neal led at halftime, 34-26.

Both teams found the hot hand in the third. Jarrett Taylor would lead Hillcrest, connecting for three three-pointers. Hillcrest would close the quarter with a three by Tyrell Riley as time expired.

With only a seven-point difference and momentum on the Jaguar’s side, the fourth seemed to be anybody’s ball game.

Neal’s Lewis found the hot hand for his team, and became a nightmare for the opponent. After a three by Hillcrest to pull within four, Lewis put a three through the nylon to increase the lead right back. With the lead still at seven, Lewis spotted up and connected for another three-pointer. Lewis would add another three for good measure with two minutes left to go in the fourth to give his team a 63-51 lead. Hillcrest would push for a 5-0 run late, but fall short.

The Eagles were led by Troy Lewis with 20 points and five rebounds; Tyshawn Davis with 14 points, 10 rebounds and four assists; and Treylon Watson with nine points and four rebounds.

Leading Hillcrest in scoring was Kobe Bradley with 16 points and Jarrett Taylor with 14 points.

Friday night both the Neal girls and boys varsity lost to Escambia County.

The Lady Eagles are 5-9 for the season.

Leading Neal in scoring was Tyshawn Davis with 22 points; Troy Lewis with 12; and Dalton Shell with 11.