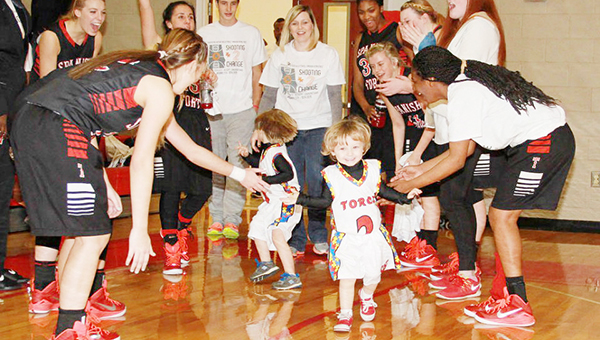 T.R. Miller basketball will participate in the second annual Shooting 2 Change event this week to bring awareness to autism.

From Jan. 17- 23, participating schools will show their support by wearing Shooting 2 Change t-shirts.

In home games Tuesday and Friday versus Flomaton and Hillcrest, TRM players will wear their special t-shirts for the event.

TRM boys head coach Juan Johnson said the opportunity to bring awareness to the cause was an easy decision.

“Getting involved in Shooting 2 Change was an easy choice,” Johnson said. “Coaching is about more than the X’s and O’s. We are in the field of educating our students about life.”

Autism spectrum disorder, or ASD, is a developmental disability that varies in each individual affected. Cases can be diagnosed as early as 18 to 24 months in children.

According to Autism Society, 3.5 million Americans lived with ASD in 2014. Autism is the fastest growing developmental disability in U.S. children. It’s diagnosed in 1 out of 68 children in the U.S, according to the Center for Disease Control.

Same as the Powell’s message of spreading awareness and educating others about autism, Johnson said it all comes down to the public understanding the condition.

“Being able to bring awareness by educating the public and accepting individuals who are diagnosed with autism are key components to Shooting 2 Change.

“Hopefully more people will have a better understanding of what these families endure on a daily basis and become more willing to assist them, if necessary.