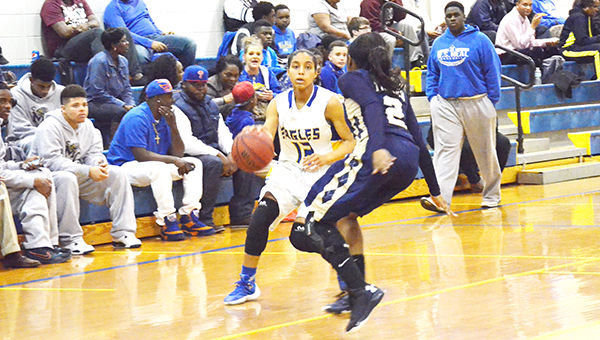 Corey Williams | The Brewton Standard
Neal’s Keke Floyd dribbles to the basket. Floyd had 33 points for the game.

Neal received 75 percent of their offensive scoring from senior Keke Floyd, who dropped 33 points in Neal’s victory over Monroe County.

The Lady Eagles created breathing room in the second quarter outscoring Monroe County 14-2 to give them a 21-8 lead going into halftime.

Neal outscored Monroe County 23-17 in the second half to pick up the win.

To go along with her 33 points, Floyd had four rebounds and five steals to lead Neal. Alijah Stewart and Alyssa English both had four points and Marishia Fraser contributed eight rebounds for the night.

The Lady Eagles are 6-11 for the season.

Through three quarters, the score was dead even between Neal and Monroe County 47-47.

With the score 58-53 in the fourth and less than a minute to go, the Eagles struck quick, first off a made bucket by Darius Tolbert. Seconds later, guard Treylon Watson picked up a steal in the backcourt and found Troy Lewis open for his fifth three pointer of the game. Neal’s defensive intensity forced Monroe County to call a time out with less than 10 seconds on the clock. 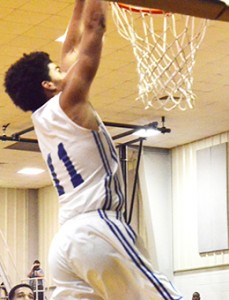 Corey Williams | The Brewton Standard
Neal’s Tyshawn Davis throws down one of his three dunks for the game. Davis had 24 points for the night.

On the ensuing inbound, the Tiger’s Tyler Stallworth caught the ball in open court and drove to the basket for an uncontested layup. As the buzzer sounded, the ball rattled through the hoop for Monroe County’s seventeenth win of the season.

“I’m very proud of our effort,” said Neal head coach Dewan Salter. “We played extremely hard but just made a couple of mistakes at the end that cost us a chance to win. All you can ask for as a coach is for your players to give everything they’ve got, and they did tonight.”

City eyes land use for parks