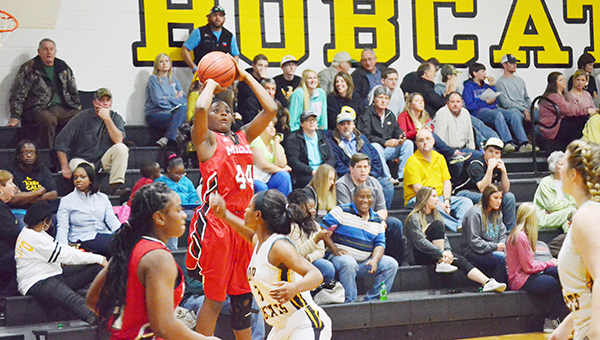 In an area matchup Friday night, the T.R. Miller varsity girls continued their winning ways downing Opp 45-16, while the boys suffered their second loss of the season against Opp, 61-71.

For the girls, Miller dominated the first half outscoring Opp 27-6. Miller started the game with a 16-0 run and  created 15 turnovers in the first half.

Miller outscored Opp 18-10 in the second half.

In injury news, guard Steely Ruzic will miss the rest of the season due to a knee injury suffered during the Red Level Christmas tournament.

For the boys, TRM found themselves in a hole early. Opp outscored Miller 21-7 in the first quarter behind Devonate Williams and Orlando Lacey, with the former scoring nine points and latter eight points.

In the second quarter Miller made up ground in the scoring department. A late quarter push led by Chardian Johnson’s nine points allowed Miller to pull to within six.. Opp led at the half 30-24.

At the end of three quarters Opp led Miller 40-33.

Johnson’s 10 points and Markail Mitchell’s nine points kept Miller in the game, but Opp had too many answers.

Down the stretch Lacey connected for a three and Williams scored seven points, including two dunks to end the game to seal the victory for Opp.

Leading TRM was Chardian Johnson with 27 points and Markail Mitchell with 12 points.

TRM no closer to new coach