Neal bounces back with area win in Satsuma 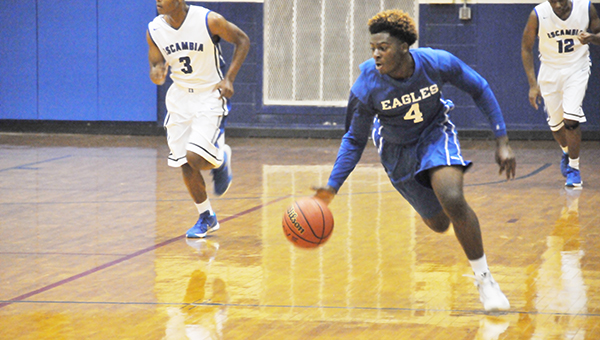 Thursday night W.S. Neal varsity girls and boys suffered losses against Hillcrest, with the girls falling 42-47 and the boys 59-70.

Earlier in the season the Lady Eagles suffered a blowout loss to Hillcrest. That would not be the case this time. Neal stayed within striking distance. At the end of the first half Hillcrest led 21-18.

Hillcrest came out strong in the third and outscored the Lady Eagles 16-10. Neal bounced back in the fourth holding Hillcrest to 10 points while scoring a team high 14 points, but fell short in mounting the comeback.

Leading Neal was Keke Floyd with 23 points and 13 rebounds.

For the boys, Neal was able to take the first matchup between the two teams earlier in the season in Evergreen. Hillcrest looked to get even.

At halftime Hillcrest led Neal 35-28. A dismal third quarter for Neal in scoring made it hard for the Eagles going into the fourth. Hillcrest outscored Neal 16-9 in the third.

Neal’s Tyshawn Davis had a breakout fourth scoring 22 points, but the effort wasn’t enough to close the deficit.

The Lady Eagles are on a four game losing streak.

The boys picked up an area win against Satsuma.

After the win the boys are 12-4 for the season.