Williamson plays in Under Armour tourney 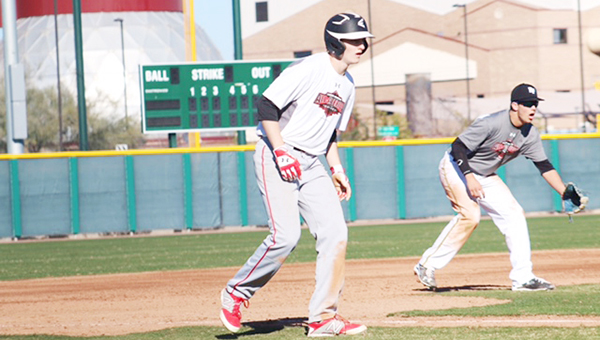 Courtesy photo
Williamson takes a lead off third base at the Under Armour Preseason All-American Tournament in Mesa, Ariz.

From Jan. 15-17, T.R. Miller sophomore Drew Williamson participated in the Under Armour Preseason All-American Tounament in Mesa, Ariz.  The tournament brings together some of the top talent in the nation.

On competing in the tournament Williamson said the experience was a blast.

“It was a great experience,” Williamson said. “I was very excited to have this opportunity. The best part was meeting and playing baseball with great players from all over the country.”

Williamson said he has a lot of people to thank who have inspired and encouraged him to play the game he loves.

“First, I would thank God for blessing me with the opportunity to play baseball,” he said. “Also, my parents, who have always supported and encouraged me. And of course, my coaches who have always taught me to work hard.”

As a freshman last season, Williamson played 22 games, posting a .472 batting average with 17 RBIs and nine doubles at the plate and scored 32 runs.

TRM head coach Kevin Madden is in his first year as head baseball coach but he said it hasn’t taken long to see that Williamson is a hard worker when it comes to his craft.

“(Williamson) pays attention to the little things,” Madden said. “He has good work ethic and is dedicated to getting better. Being a sophomore and being offered the opportunity to play in the tournament is a huge compliment to him and a testament to his hard work.”

With the upcoming baseball season just around the corner Williamson said he has been working in the offseason with a particular focus.

“During the off season my main focus has been getting stronger and faster,” he said.  “I’ve been doing lots of weight training and running to improve on those areas.”

Williamson is the son of Ed and Leslie Williamson of Brewton.