A Game of Rivals 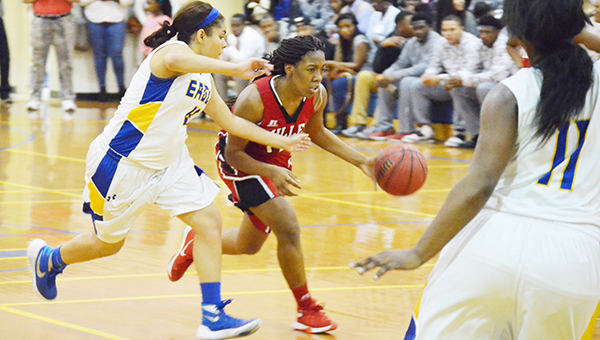 The T.R. Miller girls survived a scare Friday against W.S. Neal picking up the victory 35-26. The WSN boys took control of the whole game against TRM, defeating the Tigers 59-38.

The Lady Eagles led 11-7 at the end of the first quarter, finishing the quarter on a 5-0 run.

In the second quarter Miller answered back, outscoring Neal 11-3. Miller led 18-14 at half time.

Miller went on a 7-2 run to begin the fourth that forced Neal to call a timeout. After the timeout Miller added two more buckets by Kyla Bell and Williams. Free throws by Morgan Longemire and Williams sealed the Tiger victory. Miller outscored Neal 14-4 in the fourth quarter.

“(Neal) was mentally fired up and ready to play,” said TRM head coach Ron Jackson. “We played a little over confident.  I don’t think mentally we were prepared to play today. We did a pretty good job defensively. We wore them down and we got a chance to beat them in the end.”

“The girls played extremely hard,” Salter said. “We just couldn’t get the shots to fall when we needed them the most.”

Leading Neal was Keke Floyd with 14 points and eight rebounds. 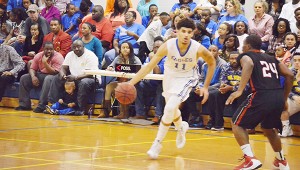 For the boys, the Eagles jumped out the gate, going on an 8-3 run. Neal closed out the quarter strong after a three pointer by senior Treylon Watson to give itself a 13-3 lead going into the second quarter.

The second was a high-powered scoring quarter for both offenses. Neal scored 18 points in the quarter and Miller scored 17. At the half Neal led 31-20.

Neal’s Tyshawn Davis led the Eagles with nine points in the third. Miller’s Chardian Johnson did his best effort to keep the Tiger’s close scoring six points in the quarter. Neal led 43-29 at the end of the third.

The fourth quarter proved all Neal as the Eagles outscored Miller 16-9 to close out the game.

WSN head coach Dewan Salter said he was proud of his team’s effort.

“We’re playing with a positive attitude and awesome effort,” Salter said. “You put those two together and you get a great performance. I thought we played better on defense, slowly getting better and that’s something I’m proud of.”

“Tonight we just didn’t get it done,” Johnson said. “We had some opportunities early but we just didn’t make the plays. We will go back and look at the film like we have done all season and find a way to get back on track.”

Leading Neal was Tyshawn Davis with 26 points and 10 rebounds.

Neal will play Flomaton Thurs., Feb. 4 in Flomaton. The Eagles will close out its regular season on Friday at Robertsdale.

Miller will play it’s last regular season game at home against Escambia County on Friday. Seniors will be honored.

Working for our future