Spring is on its way? 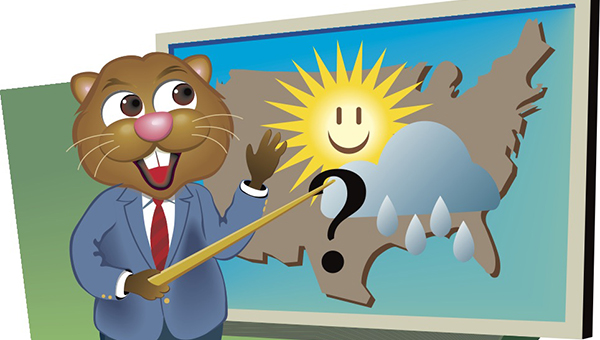 Phil, the Pennsylvania groundhog, failed to see his shadow on Tuesday, meaning an early spring is on the way.

Spring is on its way – or at least according to the famous rodent Punxsutawney Phil.

Phil, the Pennsylvania groundhog, failed to see his shadow at dawn Tuesday, meaning he “predicted” an early spring.

A German legend has it that if Phil sees his shadow on Feb. 2, winter will last another six weeks. If not, spring comes early.

Records going back to 1887 show Phil has now predicted more winter 102 times while forecasting an early spring just 18 times. There are no records for the remaining years.

Tuesday’s celebration was billed as the 130th forecast by Phil.

His counterparts in other states – Staten Island Chuck in New York, General Beauregard Lee in Georgia and Jimmy the Groundhog in Wisconsin – also “predicted” early springs.

Locally, the forecast predicts warmish temperatures. Today’s high is set at 67 degrees with a 90 percent chance of rain. Temperatures range between 57 and 61 degrees through Monday with sunny to partly cloudy skies, but no rain, predicted.