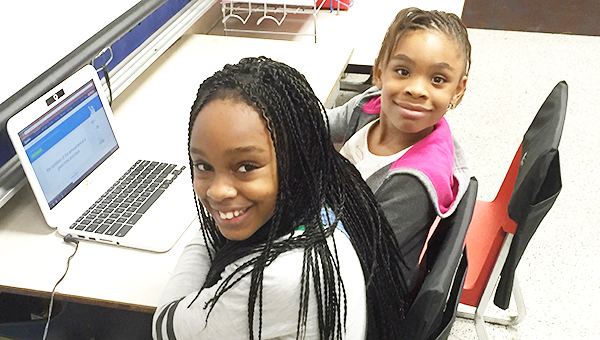 Corey Williams | The Brewton Standard
Adyson Turner and Monessa McMillan work on a class exercise together on the Chrome book.

Students at Brewton Elementary School have traded their book pages for something new – homepages, as they get acclimated to using new Chromebook computers.

One group of students, Ginger Roberts’ third graders, said they have enjoyed the new technology. 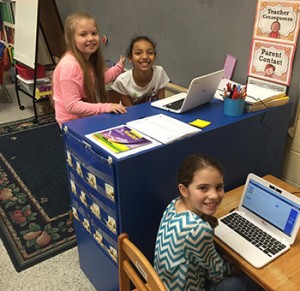 Kylee Walton (bottom), Taya Thomas and Maria Streety (above) at work on the Chromebooks Tuesday.

“We’ve had the Chromebooks for a couple weeks,” Roberts said. “It creates a way for the students to do research, exercisses and study such as with flashcards. The kids really like it. It’s been great.”

The Chromebooks – 92 in total – were purchased from a grant by Poarch Creek Indian and are used in classrooms in kindergarden through fourth grade.

“I’ve had teachers use them for group work,” Lambert said. “They can be used for Accelerated Reader tests, test prep or independent uses like games and learning how to type. There are a lot of possibilities with the Chromebooks and the kids absolutely love them.”

Lambert said upgrading in technology is important for getting students prepared for the future.

“We’re getting to where if children don’t know how to properly use a computer they’re handicapped,” Lambert said. “We’re teaching word processing in our computer labs for third and fourth graders. We’re teaching them on how to research. We want them to be successful at whatever they may choose to do in the future.

“Technology has changed a tremendous amount through the years,” she said. “We’re moving forward in the 21st century and we’re excited about it.”

Is that a monkey?