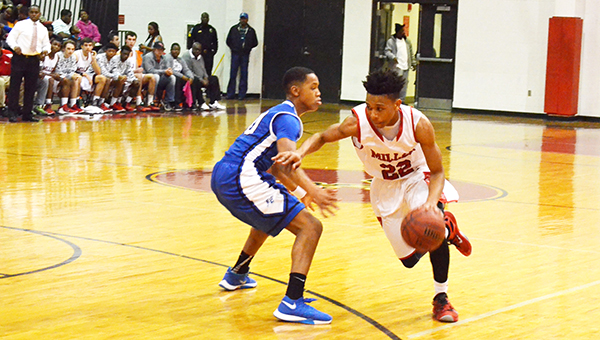 A 12-point run in the fourth quarter placed the T.R. Miller Tigers in position to bring home the win on senior night, but late game troubles stunted the possibility.

With four minutes to play, TRM senior Brooks Brown tied the game after making two free throws. On the next possession Atmore’s Luerensley Williams knocked down a jumper to give the Blue Devils the lead 53-51. Miller quickly responded when senior Chardian Johnson made a jump shot to tie the game.

Miller took its first lead of the game when Brown knocked down an open three-pointer to make the score 56-53. The Blue Devil’s Williams responded with a three-pointer on the other end to draw the score even.

Atmore took the lead back 57-56 after a made free throw.  After a timeout the Tigers had the ball. A blunder on a bad pass turned the ball over back to the Blue Devils. The Tiger’s quickly fouled to send Atmore to the line.

A lane violation gave the ball back to Miller with 8.6 seconds left to play. TRM’s Johnson drove to the basket and was able to draw contact for the foul. Johnson took to the free throw line to give the Tigers the tie and lead.

He missed the first attempt. On the second attempt the ball rattled out for the miss. Prior to the two free throws, Johnson was 7-of-8 from the free throw line.

The Tigers were forced to foul. Atmore missed its free throw. Miller rebounded the ball but had no time outs to stop the clock. Having to travel the length of the floor the Tigers were unable to get up a clear shot before the final buzzer.

The Tigers finish the regular season 10-11. 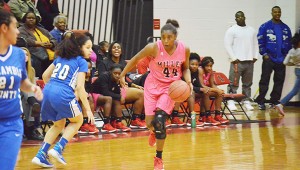 Corey Williams | The Brewton Standard
No. 44 Aleria Smith crosses over an Atmore defender on her way to the basket.

Earlier in the night the Lady Tigers kept up their dominance that has been the story for the majority of the season. Behind senior Mekhia William’s 24-point performance Miller outscored Atmore 34-15 in the first half and 14-8 in the second half.

The Lady Tigers finish the regular season 20-3. The team was 4-0 against area opponents.