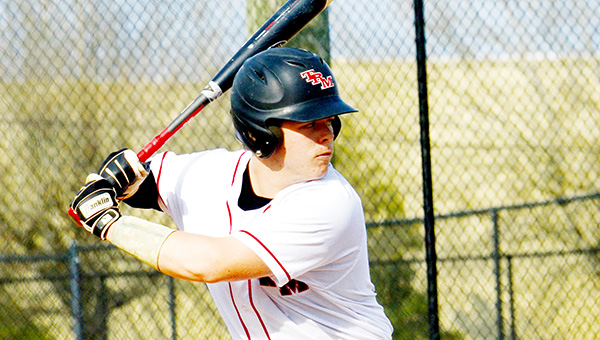 File photo
Brittain will join fellow teammate JoJo Booker after announcing commitment to South Alabama. Brittain will compete in June for a spot on the 20-man roster of team USA

Another T.R. Miller Tiger has committed to play baseball at the University of South Alabama, junior catcher Hunter Brittain.

Brittain said he fell in love with the school two years ago when he took part in a tournament on campus.

“It’s always been a dream of mine to play college baseball at a program like (USA),” Brittain said. “The facilities are great; the coaches are awesome, and the baseball program is really strong. I can’t wait to be a part of it.”

Located in Mobile, USA has won 15 Sun Belt championships, with its last conference title coming in 2015. The team was 37-20 this past season.

Brittain added he felt “at home” on his most recent visit a couple weeks ago.

“I felt really at home and at peace that this is where God wants me to be,” he said. “It’s great that I won’t be far away from my family, and it’s pretty cool that two of my teammates will be JoJo Booker and Andrew Cash.

Brittain, Booker, a junior at TRM, and Cash, a senior at Flomaton High School, are all friends. As well as both playing for TRM, Brittain and Booker also play travel ball together.

As a hitter last season, Brittain batted .431 with three homeruns and 35 RBIs in 86 plate appearances. He was named to the 3A all-state first team.

“We are very proud of (Brittain) and all his accomplishments. He is very deserving of the opportunity of not only to further his career in baseball but also to further his education. I look forward to seeing the bright future he has ahead of him.”

With South Alabama on the horizon, for now Brittain said he is excited for this upcoming Miller baseball season.

“Now I just need to concentrate on getting stronger and better,” he said. “I’m ready to put in the work to be the very best that I can be. I’m really excited about our Miller season coming up. I love this team and I’m hoping this will be our year,” Brittain said.

“As happy as I am about my commitment to South Alabama, I can’t imagine a better feeling than winning a state championship at T.R. Miller.”