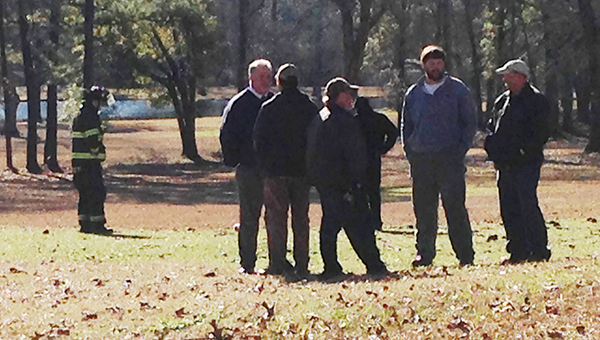 Stephanie Nelson | The Brewton Standard
First responders and college personnel discuss how to handle the suspicious containers – one of which is pictured to the left.

The state bomb squad was called to Brewton Tuesday after four suspicious containers were found on the Jefferson Davis Community College campus.

The containers – which contained toilet bowl cleaner and tin foil – were believed to have been made as a prank, officials said. The containers were found as maintenance people made the rounds on the college property.

“Thankfully, no one was hurt,” said Brewton Fire Chief Jeff Salter. “The thing about these kind of devices is that you never know what they involve. When the tin foil reacts with the chemicals, it creates heat and expands.”

Salter said the hazmat team, as well as the Alabama State Trooper Bomb Squad, were called to the scene across from the dormitory apartments to dispose of the units.

“They collected the evidence and are looking into it,” Salter said. “It’s believed to be a prank, but those things can blow your hand off. It was better to be safe than sorry when dealing with them.”