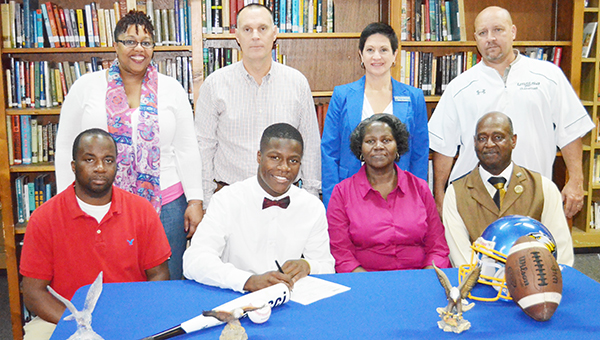 On switching from an Eagle to a Tiger, Hawthorne smiled it off with an assured remark.

“It’s going to be different wearing red and not wearing blue,” he said. “I guess I can say ‘Go Tigers’ for a few years. Just know it’s the UWA Tigers. I’m always going to be an Eagle no matter what. Blue and yellow will always be in my veins.”

On National Signing Day, the star athlete signed his letter of intent to play football and baseball at UWA.

“When I went on my visit it felt like I was at home,” Hawthorne said. “They offered me a chance to play football and baseball. That was a huge factor. It just felt right.”

Hawthorne said he gravitated toward the camaraderie the football and baseball programs each showed at West Alabama.

“I want to be a part of a group that’s close knit like that,” Hawthorne said. “I want it just like here. I’ve played with these guys here all my life. I don’t want to go somewhere where this guy goes this way and that guy goes the other way. I want a close team. I feel a team plays better that way.”

In football Hawthorne is coming off a senior season where he rushed for 1,227 yards and 17 touchdowns on offense. On defense he accumulated 67 tackles and three interceptions.

Neal head football coach Doug Hoehn said UWA is getting a great addition to their school.

“He was our team leader and team captain this year,” Hoehn said. “He played extremely hard every single play the entire year no matter if it was offense, special teams or defense. I’m as proud of him as much as anyone I’ve ever had the privilege to coach here at W.S. Neal.

“I’m just so happy for him,” Hoehn said. “He’s going to have a great career at West Alabama. They’re getting a very good football player in him, and I think he’s going to do very, very well there.”

“He has developed into a leader on and off the field,” said Neal head baseball coach Coy Campbell. “I expect him to be successful in both sports because he works and plays hard. It’s been a pleasure to coach him the last five years.”

Hawthorne said UWA plans to play him at defensive back in football and outfield in baseball.

He is leaning towards studying education or kinesiology.

Hawthorne’s mother, Gwenda Hawthorne, said she is excited for her son.

“Malcolm has always been focused on sports,” Mrs. Hawthorne said. “I think he not only plays it, but also enjoys doing it. He is very dedicated at what he does. I’m glad to see him move on and move up. It’s exciting for him and for me. I’m glad to have this day come.”

Hawthorne said he would like to thank his mother and entire family, coaches, teammates, teachers and counselors. He also wanted to thank someone else special who has had a lasting affect on his life.

“I want to thank my Dad even though he’s not here,” Hawthorne said. “He taught me a lot on how to be a man.”

Hawthorne is the son of Gwenda Hawthorne and the late Alexander Hawthorne, Jr. 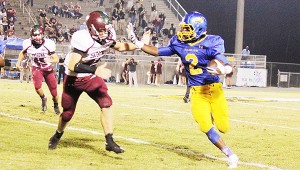 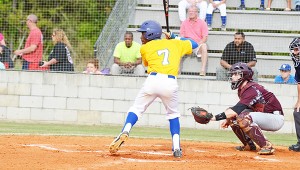 File photos
Above: Hawthorne stiff arms a defender. Below: Hawthorne eyes a pitch to hit.