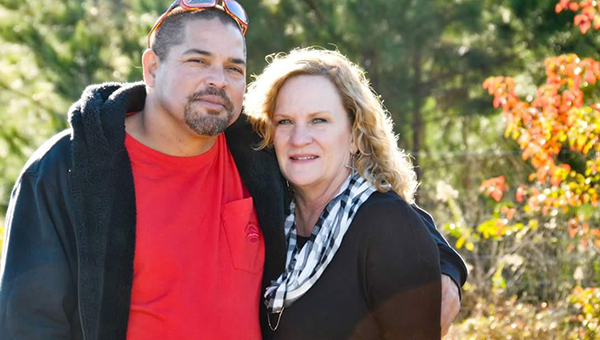 Courtesy photo
Tony Tagudar and his girlfriend, Denise, pose for a recent photo. A Saturday fundraiser is set to help raise money for his medical expenses.

The community is being asked to lend a helping hand to a Brewton man battling cancer.

Tony Tagudar, 49, has been diagnosed with esophageal cancer, which has spread to his liver and lungs. Currently, he sits in the Mobile Infirmary hospital where he is receiving chemo treatment.

To help his family combat growing medical expenses, a benefit has been organized for Saturday at 10 a.m., said cousin Melanie Jett.

Described as a former tugboat operator who previously owned a logging business, Jett said her cousin is a “man who is always going to give you a smile and a wave.”

“And that’s why it’s so important for us to help him because he would do anything for anyone,” she said of Tagudar.

Jett said Tagudar’s condition was discovered when chiropractor visits did nothing to alieviate his back pain.

“He’d been having a problem with acid reflux, too and finally went to the doctor,” she said. “When the doctor did an MRI, they saw some spots on his liver and lungs. When they went to run the scope, they didn’t get far before they hit the tumor. From there, it spread.”

Jett said her cousin’s case is a prime example of how important annual checkups are.

“His cancer is one of the most over-looked cancers,” she said. “People think the symptoms are signs of other things. So, go see your doctor each year.”

The fundraiser will be held at Stinky’s Beach, located just over the county line on Conecuh County Road 7, off Ala. Hwy. 41.

“We have a full day planned,” Jett said. “There will be fish and bar-b-que plates and crawfish for sale, plus there will be a bake sale, cake walk, face painting and bouncey house for the children.

“There will also be a motorcycle ride that will leave at 11 a.m.,” she said. “Registration for that begins at 10 a.m. There really is something for everyone and it’s all for a good cause.”

Jett said a silent auction and live music will be ongoing.

“We have Smoke & Ashes that will take the stage at 5 p.m., so bring your coolers and chairs and enjoy the music,” she said.

Those who would like to donate items for the silent auction are asked to contact Jett, Elizabeth Rhodes, Sherri Lowery Weaver or Emma Grandison on Facebook.

“We’ll be glad to come pick it up and give you a receipt for tax purposes,” Jett said.

Monetary donations for the family are also being accepted at any Wells Fargo branch under “Tony Tagudar Donations,” she said.