Neal softball in search of identity

Last season the W.S. Neal softball team posted a record of 9-14-1 and finished third in area play. Head coach Jeff Haney said he looks for this season to be better than the prior one.

“(Last season) was disappointing,” Haney said. “We expected to do a little better. We had a young team. We just didn’t end up where we wanted to be.”

The 2016 team will have three returning seniors, three juniors, three sophomores, three freshmen and one eighth-grader. 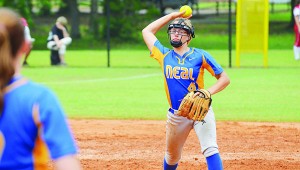 In the infield Karissa Johnson, Adria Barnett, Tori Wyatt and Aleigh Lanier will see time. Senior Madison Winchester and sophomore Jena Wyatt may play some infield as well. Senior Kaeli Brown will be behind the plate and will be asked to play a big leadership role this year.

“Kaeli is a fifth year catcher for us this year, “ Haney said. “She does a great job with our pitchers, especially with our young staff. She’s going to be very important for us to kind of be like a coach on the field for them.”

“(Marishia Fraser) started some games for us last year,” Haney said. “She has developed into a good outfielder. She’s strong and fast. We’re expecting big things out of her this season.”

Haney said timely hitting will be the key to the offense’s success this season.

“We struggled at the plate the last couple years,” he said. “Last year we did a good job getting runners on base. We just couldn’t get the timely hit. We’re a year older and a year stronger. The girls have been working hard in the weight room. I think we’re going to have a lot better year offensively.”

Haney said a year of maturity will help his team defensively.

“We should be pretty solid (on defense),” he said. “We struggled in some positions last year. A lot of it was mental. We have mostly every one back, so the experience from last year should help us.”

Neal is scheduled to face UMS Wright and Satsuma in region play. Last year, the Lady Eagles split with Satsuma and lost both head-to-head games against UMS Wright.

Haney is in his ninth year as head coach.

The Lady Eagles will start its season on the road against Jay on Feb. 16. JV will play at 4 p.m. followed by the varsity at 6.

Neal baseball to focus on the little things