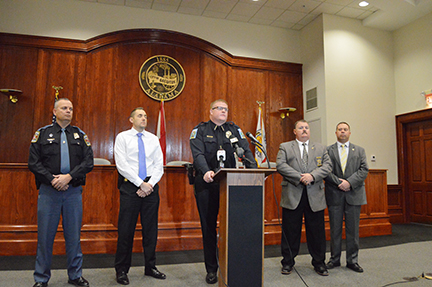 “At first, we looked at it as a runaway, but with the days passing, we still don’t know any more than we did on day No. 1,” McGougin said as he was surrounded by representatives from the state and federal bureaus of investigation and the Escambia County Sheriff’s office at a press conference held at Brewton City Hall Thursday morning.

Scores of state and federal agents arrived Wednesday to help in the search for the missing teen last seen Sunday night around 11 p.m.

While McGougin didn’t share the details of the case, he asked for the public’s help in locating Bridges and said, “This case is baffling. Usually by now, we’ve picked up something that points us to runaway or abduction. Right, now we’ve got nothing good and nothing bad.”

McGougin said the 911 call came into the BPD shortly after the teen’s father awake at 4:30 a.m. for work and found an open front door and his daughter missing. Investigators arrived at 8:30 a.m. Monday and since then have worked around the clock to locate the girl.

Douglas Astralaga, spokesman for the Federal Bureau of Investigation’s Mobile office, said the FBI becomes involved in missing person cases any time a child is involved.

In addition to the FBI and SBI, McGougin said several hundred people – “from patrons to professionals” ­ are searching a five-mile radius around Alco Lake.

Astralaga confirmed the agencies are working leads and plan to hold another press conference this afternoon.

Bridges’ mother, Lisa, told The Brewton Standard Tuesday that her daughter would not have run away and left the home wearing only her pajamas and glasses – no shoes and no jacket.

She believes her daughter was taken from the home.

“In my gut? I think she must have opened the door to someone, and they snatched her,” Mrs. Bridges said previously. “She’s 100 pounds soaking wet. She had on nothing but her pajamas and glasses. No shoes, no jacket, and it was 20 degrees that night. It was 40 when we called 911.

“So, would Brooke have run away? Absolutely not,” she said. “That would be absurd. Any behavior like this is so out of character for her.”

To read the story of the complete interview with the Bridges’ family, click here.

Child struck in East Brewton while walking to school,…