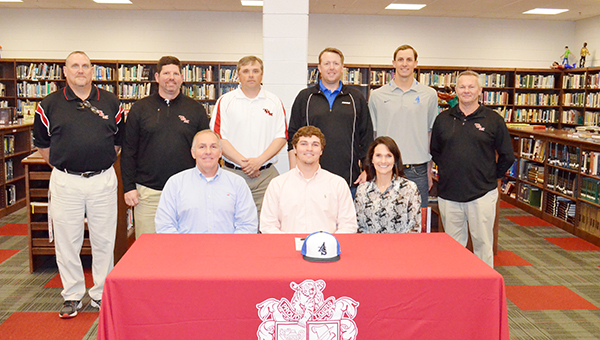 The two-sport athlete said playing close to home was important and that Alabama Southern made an impression on him when he visited the campus.

“(Alabama Southern) is close to home,” Floyd said. “The campus is easy to learn. All the players were nice when they introduced themselves to me. And the coach (Daniel Head) made an impression on me just on how he talked to me and showed interest.”

“(Tripp Floyd) is a left-handed pitcher that has a lot of experience,” Head said.

“We’ve been following him the last few years and he has continued to grow and develop. We think he can come in and make an immediate impact on our pitching staff.”

Floyd is joining an Alabama Southern program that went 23-28 last season. In the prior season, the Eagles came within a game of winning the state title and bid in the Junior College World Series.

“Not only is Alabama Southern getting a great baseball player but they’re getting a great leader,” Madden said. “He’s just a mentally tough kid. He played linebacker in football and he’s got that linebacker mentality. He brings that over into baseball. When you have that mindset its hard to beat. I think he’s going to do well at the next level.”

Floyd said he still wants to continue to get better on his pitching.

“I’m getting better everyday with Coach (Kevin Madden),” Floyd said. “He has helped me a lot. I think going through this whole season with Coach Madden will make me a lot better, and then to get working with Coach Head and coach Eli Cook will help a lot too.

Parents Robbie and Stephanie Floyd said they are very proud of their son.

“He’s worked really hard playing football and baseball [at TRM],” Mr. Floyd said. “I wouldn’t trade it for anything in the world. Every environment he’s been in he’s succeeded. So I think he’ll succeed at this level too.”

“It’s a dream that I know he has had since he was a little boy,” Mrs. Floyd said. “To be able to play baseball in college. It’s been fulfilled. So I’m pretty proud of him and excited myself.”

Floyd said he is very appreciative of his parents.