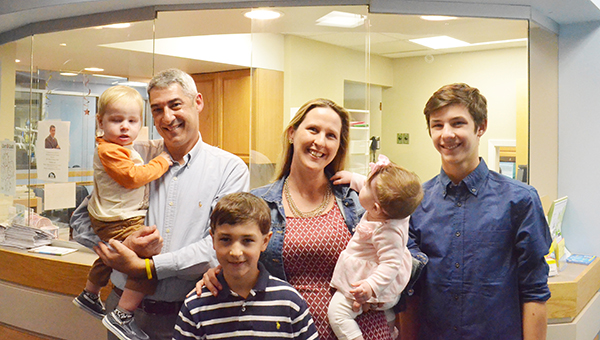 Corey Williams | The Brewton Standard
Dr. Paul LoDuca with his family at the welcoming celebration.

“I’m looking forward to being very busy here for a long time,” Dr. LoDuca said. “I think this is a great opportunity for me professionally and for my family. We’re very happy to be here.”

Dr. LoDuca comes from Columbus, Ga., where he spent five and a half years doing pediatric oncology and hematology.

He said his interest in medicine stems back all the way from early childhood. His mother was an operation nurse. From there his journey to this point in his life and career is filled with experience, with love of medicine never quite too far away.

He spent time in the army as a Blackhawk crew chief in the Persian Gulf and Panama wars.

He then attended the University of Florida where he met his wife Summer. He served as a medical technologist at a blood bank. He then started volunteering with a fire department. While enrolled in emergency medical technician school and doing medical calls he again developed an interest in medicine.

At the age of 36 he talked to his wife about going into medicine.

He went to medical school at the Rosalind School of Medicine in Chicago.

While in medical school his interest switched from emergency medicine to pediatrics.

“I found out there wasn’t that prolonged patient contact,” Dr. LoDuca said. “You couldn’t tell you made a big difference because you didn’t see the patients back again. When I did pediatrics in my third year of medical school I fell in love with it.”

After finishing medical school he did his residency and fellowship training at the University of Florida. He did his sub specialty training in hematology and oncology. His interest in oncology was sparked by the love he had for his sister.

“My sister was diagnosed with liver cancer in my second year of medical school. She ended up passing away from liver cancer. That time was tough for me and I wanted to understand what was going on and be able to help others going through the same thing.”

From residency in Florida, to practicing in Columbus and now Brewton, Dr. LoDuca said he is getting to do his first love, general pediatrics and to help kids and oncology patients.

D.W. McMillan CEO and adminstrator Chris Griffin said that he is excited to have Dr. LoDuca at D.W. McMillan Hospital and the Brewton Medical Center.

“I think we’re very fortunate to have Dr. LuDoca here,” Griffin said. “I’m excited about it. He’s a real quality person to be around and brings a lovely family to the community. It’s been a pleasure of mine to welcome him and his family to not just D.W. McMillan Hospital and Brewton Medical Center but also to the Brewton community.”

Dr. LoDuca said that the community has welcomed him and his family with open arms.

“I love the town. Columbus is a big town as far as population but everyone kind of knows everybody,” he said. “It’s very similar to Brewton where if you walk around everyone knows somebody. It’s a very tight community. That’s what I love.”

No tax on weather items this weekend