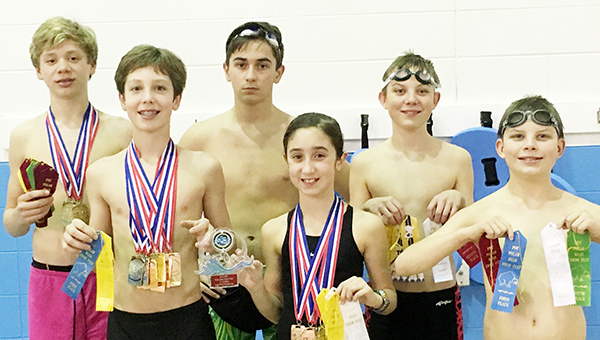 Courtesy photo
The Tigersharks performed well at the PNY Polar Bear Swim Fest in Gulfshores having numerous swimmers placing at the top of their age group. Pictured in the back row from left to right is Cole Jernigan, Colby Morris and Dean Thelen. Front row from left to right, Nolan Atkinson, Kinsley Byrd and Jacob Thelen.

The Brewton Local Area Swim Team Tigersharks recently traveled to Gulf Shores to attend the PNY Polar Bear Swim Fest held at the Bodenheimer Recreation Center on January 30 through 31. The Tigersharks, led by swim coach Angel Boyd, had a banner weekend winning high point awards in the girls 9-10 and boys 11-12 age groups, as well as have swimmers medal and ribbon in many other events.

Nolan Atkinson, son of Rob and Lisa Atkinson, was a 12-year old stand out and high point award winner at the meet. Atkinson trophied and medaled in each of his individual events cutting three individual times for the Southeastern Championships and swimming a 27 second 50-yard freestyle in Gulf Shores.

“Nolan is a stand out freestyler who is a natural born sprinter,” Boyd said. “There is no doubt when he walks on the pool deck what place he is swimming for.”

Atkinson will be joining other Tigersharks standouts in Auburn for the Southeastern Championships Feb. 19-21.

Kinsley Byrd, daughter of Dylan and Beverly Byrd, trophied as a high point winner in the 9-10 girls age group. Byrd, a recently turned 10-year old, was one of the youngest in her age group at the meet.

“Kinsley has a focus well beyond her years,” Boyd said. “Her drive is like no other I have seen.”

Byrd also medaled in each of her individual events and achieved an additional cut for the Southeastern Championships in Auburn for the 50 and 100-yard breaststroke events.

Cole Jernigan, son of Lee and Felicia Jernigan, had an amazing meet dropping times all over the heat sheet to make the cut in the 100-yard backstroke for the Southeastern Championship.

Colby Morris, son of Brandee Chase who turned 15 the end of October, also swam great in the meet.

“Colby, a pure freestyler, has really come into his own the past few months swimming consistently under 25 seconds in the 50 freestyle,” Boyd said.  “Each time he steps up to the blocks he’s under 56 seconds in the 100-yard freestyle.

Caleb Kent, son of Danny and Phyllis Kent, had a great meet as well.

Kent, who is an 11-year old in the 11-12 age group only swam one day of the meet, but helped rack up some great points and some great times for the team. Kent also led off on the award winning 11-12 boys relay team.

“Jacob has worked hard, and it has paid off this weekend,” Boyd said.

He tackled the 500 free for the first time and had plenty of gas left in the tank when he finished. He is a swimmer who began last fall and has worked his way up the ladder. I am very proud of his efforts,” Boyd said.

Other stand out Tigersharks from the PNY Polar Bear Swim Fest included:

The Tigersharks will be in action again this weekend, Feb. 19-21, in Auburn.