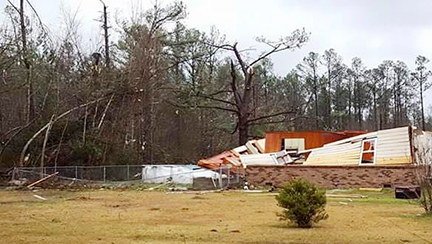 Courtesy photo
This home of an Atmore Advance employee family member in Century was flattened by an F2 tornado.

At least three people were injured Monday as a tornado ripped through parts of Escambia County in Florida and Alabama. Thankfully, none of those injuries occurred in Brewton or East Brewton, officials said Tuesday.

The storm rolled through the area at approximately 3:30 p.m. and continued across the state causing damage not only locally, but also in Covington County. There, the storm destroyed a volunteer fire department as well as numerous homes and structures.

There was significant damage reported at W.S. Neal High School. Superintendent John Knott said winds took down a power pole and caused a power outage in the old high school.

“The crew from Alabama Power responded immediately and didn’t leave until things were back up and running,” Knott said. “They replaced the pole and three transformers.

“Also we had just finished work on the girls’ softball field, and it looked great,” he said. “Winds took our new fence and did some other damage there.”

Knott said the Lady Eagles’ next home could be moved to Atmore if the damage is not fixed by Thursday.

Other reports indicate that a Century woman was trapped in her Jefferson Avenue mobile home after winds threw another mobile home on top of her home. The woman, who was not identified, was eventually freed through rescue and volunteer efforts.

It’s too soon to tell the exact extent of the damage as emergency crews continue to clean up in Century and McDavid, Fla., as well as minor damage in Flomaton, Pollard and into Brewton.

Numerous homes in Century were completely destroyed as a result of the tornado. Weather officials classified the tornado as an F-2.

Crews continue to work in the cleanup effort, as well as to restore power to all areas of the communities.