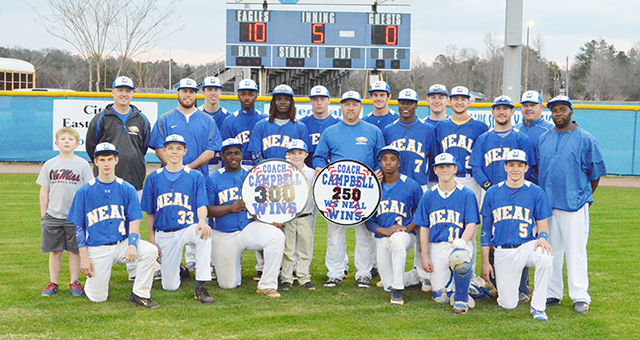 Corey Williams | The Brewton Standard
Campbell collected win No. 250 as Neal head baseball coach on Monday with his team’s win over Pensacola Christian.

A few days removed from clinching his 300 career win as a baseball head coach, W.S. Neal’s Coy Campbell continued his climb in the Eagle record books with win no. 250 with the Eagles, after his club defeated Pensacola Christian 10-0.

The Eagles got it cooking in the bottom of the second, starting with a single to right field by senior Derrick Barton to score Sam Frazier. In the next at bat, catcher Dakota Graves stepped up to the plate and delivered a line drive homerun over the left field fence. Later in the inning first baseman Jared Cooper nailed a double to centerfield to score Malcolm Hawthorne. The Eagles scored six runs in the inning on four hits.

Graves led the Eagles with three RBIs. Barton, Malcolm Hawthorne, Cooper and Frazier each had a hit.

Chavers picked up the win, pitching three innings with five strikeouts. Jacobey Hawthorne and Cooper came in for relief in the fourth and fifth inning. Combined, the trio threw a no-hitter for the game.

Learning how it all works