Life and property were saved thanks to a routine police patrol Sunday morning.

“When Casey reported the fire, others quickly responded, including those with the Brewton Fire Department,” he said. “Just before fire trucks arrived, Casey, along with officers Joey Smith and Heath Madison, began a door-to-door evacuation of the complex’s residents. 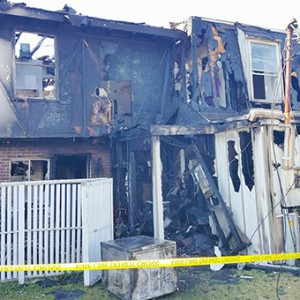 Photo courtesy of BFD
Charred wood is all that remains of a portion of the apartment complex.

“This is a great example of good police work and great teamwork,” McGougin said. “Everyone who responded should be commended for a job well done.”

“At the peak, there were some 20 firemen on the site,” Salter said. “When we initially responded there was heavy fire in the back and the roof structure was on fire.

“The homeowner happened to wake about the time Sgt. Casey observed the smoke,” Salter said. “The homeowner attempted to locate the source of the smoke, and when he couldn’t, evacuated with his family.”

While the damage to the two apartments is extensive, no one was injured during the incident.

“I can’t commend these guys enough,” Salter said. “We could’ve easily enough lost that whole apartment complex. These guys worked tirelessly to save that building and the families inside. It could have been a very sad situation if it weren’t for the quick response of all involved.”

The fire is currently under investigation by the state fire marshal’s office; however, it is believed to have started as an electrical fire, Salter said.

Set to go on the road