‘We are so lucky; we are blessed’ 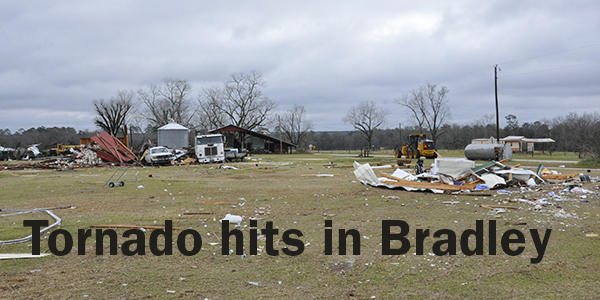 The Elliot family is counting their blessings Friday morning after a tornado struck their property Thursday night in the Bradley Community.

Ricky Elliot; his wife, Tammy, and his father were sitting down to dinner just after 6;30 p.m. when the tornado struck.

“It was like someone threw a light switch,” Elliot said. “One second we were sitting there, the next it was hail, a roar and lightning. We all made our way into the middle of the house, and in 30 seconds, it was over.”

Those 30 seconds were enough to wreck havoc on the farm – the home’s roof was ripped off; two sheds and a barn were completely destroyed and damage was done to the family’s chicken yard. 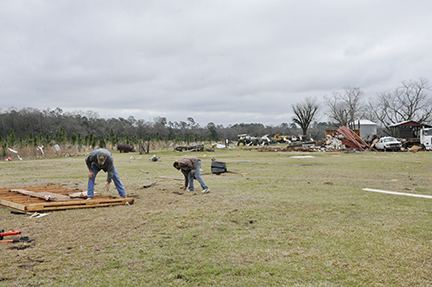 Trees next to the homes of nearby neighbors were also snapped into, but it did not appear there was any structural damage to any other homes. Trees and debris were scattered around the Tolbert Circle area as well.

“Best we can tell, the tornado came from toward Brewton,” Mrs. Elliot said. “But, you know what? We are so lucky. We are so blessed. It could have been a lot worse than it was.”

As morning came, so did the offers of help from family and friends.

“The good Lord took care of us,” she said.

The family is also asking neighbors to be on the lookout for family photos blown from the attic.

“I’d just like to know how far they went,” Elliot said.