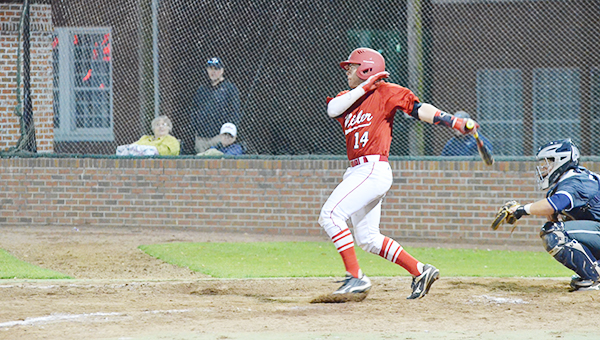 Corey Williams | The Brewton Standard
Brittain connects for a triple.

With the bases loaded in the third inning, and Miller leading 7-1, Drew Williamson belted a homerun over the right field wall to make the score 11-1.

The game seemed in hand for the Tigers until Park Crossing added five runs in the fourth to close the Tiger lead 10-7. But a two run fifth inning, and seven run six inning was all too much for Park Crossing, notching Miller its fifth win of its season.

The Tigers collected 18 hits on offense. Leading Miller at the plate was Hunter Brittain with six hits and two RBIs; and Williamson with four hits and five RBIs. Russell Smith had three hits. Jordan Williams and Jason Konsler each had three RBIs.

Joshua Winton received the win on the mound.

Miller found itself down 3-1 going into the top of the sixth inning. With a man on second base with two outs, catcher Hunter Brittain stroked a line drive to the right center field gap for an RBI triple.

The Tigers were able to plate another run when junior Jo Jo Booker found an opening in the Enterprise defense for a single.

With the game tied 3-3 going into the bottom of the inning, Enterprise answered back when Hunter Bracken connected for a two RBI triple to give the Wildcats the go ahead lead. Trey Simmons singled to score Bracken, giving Enterprise a 6-3 lead going into the seventh.

Miller loaded the bases at the top of the seventh. A fielder’s choice drew the Tigers within two runs. A pass ball scored another run. Again the Tigers loaded the bases, this time with the tying run 90-feet away. With the count 2-and-2, with two outs, Miller’s Tripp Floyd connected for a ground ball right at the Wildcat third basemen for the force out at third to end the game.

Booker led Miller at the plate with two hits and two RBIs. Brittain, Drew Williamson, Jake Najor and Jordan Williams each had a hit.

Booker took the loss on the mound.

The Tigers are 5-1 after the loss.