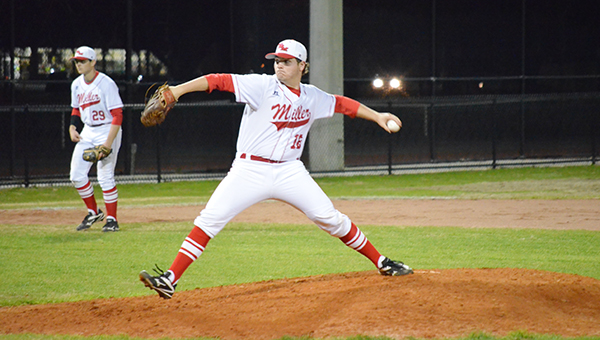 Corey Williams | The Brewton Standard
Floyd pitches earlier in the season. Floyd had 17 strikeouts over seven innings in Monday’s win over Neal.

If the first time these two team’s matched up earlier in the season was any indication of what would be in store for the two rivals on Monday, the T.R. Miller and W.S. Neal faithful would be in for a treat.

It took nine innings to decide a winner, with the Tigers winning 2-0 over Neal.

At the top of the ninth Miller was able to get a base runner on first base via the walk. Miller’s Tripp Floyd then singled to centerfield. Another walked batter filled the bases up for the Tigers. Miller’s Jason Konsler hit a ground ball to shortstop for the fielder’s choice to plate the go-ahead run. Miller scored again off a Neal error in the field to take the lead, 2-0.

Neal failed to get anything going in the bottom of the ninth.

Jacobey Hawthorne and Sam Frazier had the lone hits for Neal.

Cooper started the game for Neal and received the no decision. Cooper pitched eight innings, allowing no runs, with nine strikeouts. Dalton Shell received the loss after allowing two runs, on two hits, with two walks.

Floyd started the game and received the no decision, throwing seven innings, allowing no runs and striking out 17 batters. Caleb Winton came in the game for two innings of relief to pick up the win.