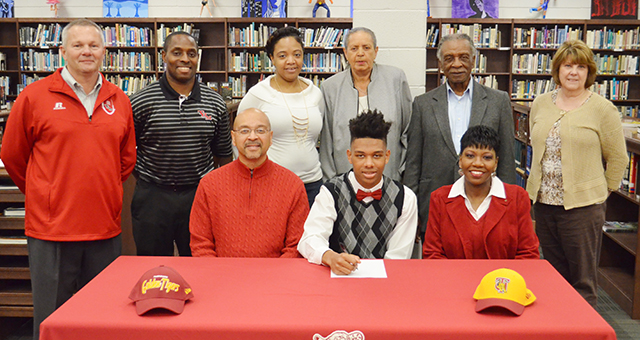 T.R. Miller star athlete Chardian Johnson will take his talents to the next level as a Tuskeegee University Golden Tiger.

Johnson signed his letter of intent this past Thursday. He said the university and staff made him feel at home.

“Like I was part of the family, really,” Johnson said of the visit.

“I want to thank God for giving me the opportunity to play football and my family and all my coaches for their support,” he said.

Johnson was named second team Class 3A all-state and all-county as a defensive back and wide receiver. As a receiver, he had a school record 49 catches for 867 yards and 10 touchdowns.

TRM head coach Jamie Riggs said Johnson is one of the most versatile players he’s ever coached.

“He was certainly as good a receiver as we’ve ever had here and a real good defensive back,” Riggs said. “He just did a lot of things. He’s a great guy who was fun to coach. With all that said, he’s a great competitor, and I think that’ll serve him well when he goes to college.” 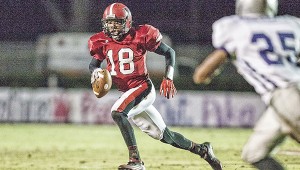 File photo
Johnson looks for an opening to make a play during a TRM game last season.

Johnson will join a Tuskegee program that went 10-3 last season and averaged 321.8 yards per game on offense.

TRM baskeball head coach Juan Johnson, who graduated from Tuskegee in 2007, said the Golden Tigers will be a great fit for Johnson. The two met when the teen was an eighth grader.

“He came and tried out for the basketball team,” Coach said. “His maturity level and growth has been tremendous over the years. He’s going to do tremendous things at Tuskegee.”

Family was on hand for the joyous occasion, including parents Durell and Shirley Johnson.

“It’s a blessing,” Mrs. Johnson said. “We’re grateful for this opportunity for him to continue to play ball, but even better to further his education.”

“The Good Lord has blessed (Johnson) with a great opportunity to go to college and play ball,” he said. “It’s been a great journey so far. We’d like to thank Coach Riggs and Coach Johnson for all they’ve done for him here at Miller. They’ve been instrumental in his development.”

Johnson said he is leaning towards studying either bioengineering or mechanical engineering.