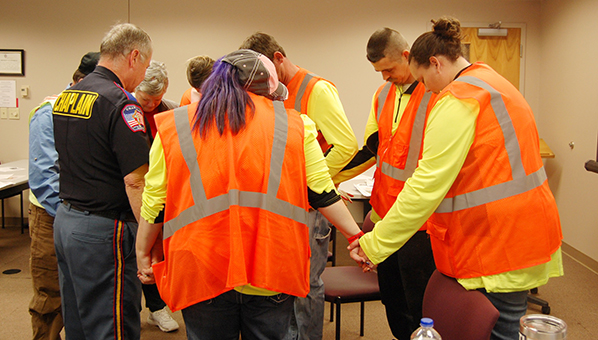 “If she were mine, I’d want people to do the same thing for us” was the general theme of Saturday’s community search for missing Brewton teen Brooke Lee Bridges.

Bridges, 16, went missing three weeks ago from the family’s Alco Community rental home. She left wearing her pajamas and glasses and carrying a cell phone.

On Saturday, finding those “little pieces” as described by Brad Dennis of the Klaas Kids Foundation was the focus of the more than eight hour, five-mile radius search. The foundation led Saturday’s search. Nearly 150 people, including four mounted units from surrounding counties and scores of ATVs, helped comb wooded areas around Brewton searching for any clues in Bridges’ disappearance.

“We treat all of these searches as part of a criminal investigation,” Dennis told volunteers. “When you’re out there, you’re looking for the small – a piece of tape, the edge of a tarp, pieces of clothing.”

Volunteers were also asked to be on the lookout for a black Apple iPhone 6, jewelry and purple framed glasses.

As crews were dispatched, a number of locals – and some as far away as Birmingham – said they were glad to lend a helping hand.

“If my son went missing, I’d want everyone out searching,” said Brewton’s Serena Terry of her son and T.R. Miller sophomore, Sam. “It tears at my heart for those parents to not know where their child is.”

“I’m thankful and grateful to everyone who showed up on Saturday,” McGougin said. “And even though we didn’t find anything, we’re still pressing forward. We’re not giving up in our search to bring Brooke home.”

And neither are Bridges’ parents, Jimmy and Lisa. Both – along with a number of family and friends – participated in the day’s search.

“It’s been long, and it’s been hell,” Mrs. Bridges said of the three weeks since her daughter went missing. The family last saw the teen just before bed Sun., Feb. 7. In the days since, they’ve waited and wondered what happened to the “bright, bubbly and humble” girl.

“It’s been hard,” Mrs. Bridges said. “We know Brooke did not run away. She’s out there. It’s never-ending – the thinking, worrying every hour is she cold; is she wet; is she hungry. We just try not to cry.”

Bridges is described as a 5’2, white female with blue hair. She was last seen wearing three spaghetti-strap tank tops – one lime green, one camouflage and one grey – and black sweatpants.

Anyone with any information about Bridges’ whereabouts is asked to contact the BPD at 251.867.3214.