Miller proves too much for Neal 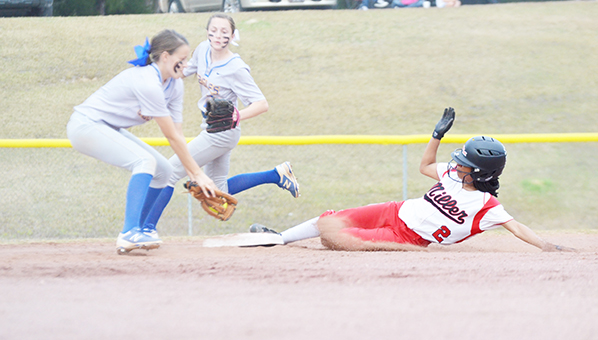 Corey Williams | The Brewton Standard
Morgan Longmire slides safe into second base on a steal.

It was a one sided game on Thursday, as the T.R. Miller softball team defeated W.S. Neal, 15-1.

Miller opened the game with seven runs in the first inning. In the second inning, Miller stayed strong, scoring seven more runs. The Lady Tigers scored one more run in the fourth inning.

Five Tigers had multi-hit games, including Taylor Austin and Anna Grace White, who each had three hits for Miller. Myra Reiss, Madison Douglas and Mary Madison Brown each had two hits, including a double by Douglass and triples by Brown and Reiss.

Douglas and White led the team with three RBIs each. Gabbi Solomon had two RBIs.Gabbi Solomon, Mallori Floyd and Grace Ruzic had a hit.

Madison Winchestor and Kaeli Brown had hits for Neal.

Aleigh Lanier suffered the lost in the circle for Neal, allowing seven runs on six hits.

Austin picked up the win for Miller, allowing one run on two hits with five strikeouts.