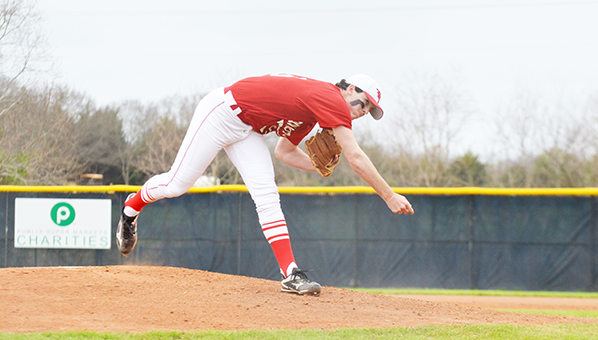 The T.R. Miller Tigers split double header games against the St. James Trojans this past weekend in Montgomery. The Tigers won game one 11-2 and lost game two 7-1 to make its season record 6-2.

The Tigers got off to an early start with a lead off double by Drew Williamson. After a walk to the previous batter, Hunter Brittain hit a two RBI double to left field.

In the second inning Brittain picked up another RBI. JoJo Booker singled for an RBI later in the inning to increase the Tiger lead, 4-0.

Miller added four runs in the fourth inning, two runs off of St. James’ errors, two more off the bat of Brittain, who hit his second double of the game.

St. James got into the score column at the bottom of inning scoring two runs. Threatening to add to its total, the Trojan’s singled to right field allowing a runner to round third for a play at the plate. Right fielder Joshua Winton came up firing to throw out the runner at home to end the inning.

In the fifth inning, Miller added two runs with an RBI single by Williamson and fielder’s choice. The Tigers added one more insurance run.

Leading Miller at the plate was Brittain going 2-3 with five RBIs. Williamson added three hits and an RBI. Booker had two hits.

Booker pitched the complete game for the Tiger win, striking out seven batters.

It was tale of two games for both teams. Miller won the first game behind stellar offense, pitching and defense. St. James returned the favor in game two.

With the score 1-0 in the third, St. James’ Russell Olsey doubled to the right center field gap to plate a run. Later Colton Alter singled to plate another run to increase the Trojan lead 3-0.

In the fourth inning, Trojan center fielder Teddy Bridges led off the inning with a double.Bridges later scored off a single by Spencer Hamilton. #8 added another RBI to give St. James a 6-0 lead.

In the fifth inning the Tigers picked up its first run off an RBI single by Williamson.

The Trojans added a run in the sixth inning off an RBI double by catcher M.J. Melendez.

Pitcher Davis Daniel of St. James held the Tigers scoreless over  the final two innings of the game.

At the plate, Booker and Williamson had a hit for the Tigers.

Suffering the loss on the mound was Joshua Winton.

Miller proves too much for Neal