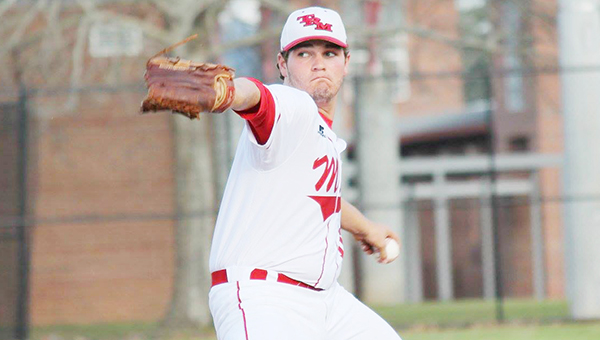 The T.R. Miller Tigers defeated Hillcrest Monday 15-0 at home. On the road Tuesday, the Tigers swept Hillcrest in a doubleheader matchup winning game one 13-0 and game 12-1.

The Tigers jumped out early scoring five runs in the first inning. Miller scored nine more runs in the second inning and added another run in the third.

Leading Miller at the plate was third basemen Jason Konsler, going 2-2 with two doubles and 5 RBIs.

The Tigers had a combined 12 hits for the game.

Senior Tripp Floyd picked up the win on the mound, pitching three innings with seven strikeouts.

The Tigers plated three runs in the first inning, and five runs in each of the second and third innings.

Jo Jo Booker led Miller at the plate with three hits with seven RBIs. Hunter Brittain had a hit and 2 RBIs. Baylen Parker led the team in runs scored with three.

Brittain got the win on the mound, pitching four innings of work with nine strikeouts.

The Tigers scored 12 runs in the first inning and never looked back. Hillcrest plated a run in the bottom of the first.

Tripp Floyd led the team with two hits. Caleb Winton, O’Neil White and Jason Konsler had two RBIs each to lead the team.

Russell Smith picked up the win on the mound.