Under-staffing at Atmore’s Holman Prison was one of the contributing factors to a weekend riot.

Things began Friday night when an altercation between two inmates escalated into a riot in the general population area. 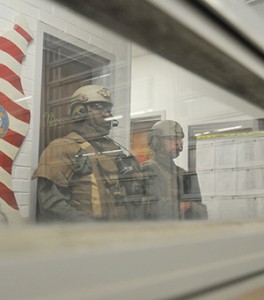 Gov. Robert Bentley said Saturday that inadequate numbers of corrections officers were on duty Friday, which allowed inmates to overwhelm the staff. In the melee, an unidentified corrections officer was stabbed nine times in the abdomen area when he attempted to break up the fight, while Warden Carter Davenport was stabbed three times. Davenport was treated on scene while the officer was transported to an off-site medical facility.

After the assault, approximately 100 inmates then gained access to a hallway outside of the dorm and started a fire. Before the state’s emergency response teams, local law enforcement personnel manned the scene.

“The inmates were two gates from coming out the front door,” Lambert said. “We entered the prison with shotguns and live ammunition, backed (inmates) back down the hall and held the perimeter.

“About half the prison was lost to start with,” he said. “It didn’t affect death row or segregation areas. There were one-to-two guards for about 160 people at a time.

“It was a blessing that no one was hurt worse or killed.”

Lambert said inmates burned out the Plexiglas to a command pod.

“From what I understand, due to understaffing, no one was manning the cube,” he said. “When (inmates) gained access, they started popping doors, which is how they made it down the hall.”

It took three state DOC emergency response teams until 5:30 a.m. Sunday to forcibly take back control of the prison.

On Monday, a second stabbing – this time of an inmate – put the facility into chaos again.

“Prisons are overcrowded, and Holman is no different,” Lambert said. “I talked with one of the (correction officers) who is making $13.90 an hour. I understand with Walmart’s new pay raise, there they start at $10 an hour, and within a short time, it goes up to $12 to $13. It’s hard to decide which one you want to work at because it takes a special kind of person to be a correctional officer.”

Bentley, who toured Holman Tuesday, addressed overcrowding in the state prison system. Holman is a maximum-security prison designed to house 637 inmates.  The current population at Holman is 991, which is 156 percent of design capacity.  The facility is overcrowded, and there is a shortage of corrections officers, Bentley said.  Disturbances like what has occurred in the last three days are some examples of the issues that have plagued Alabama’s prison system for decades.

In February, Bentley’s office introduced the Alabama Prison Transformative Initiative Act. The legislation will provide for the construction of four modern and efficient prison facilities to provide a solution to the overcrowding problem. The legislature was expected to debate sometime Tuesday.

“We are anticipating that will pass,” Bentley said.

Through the initiative, the ADOC looks to consolidate 13 of 15 male maximum and medium security prisons into three 4,000-bed facilities. Additionally, if passed, the legislation allows for the issuance in upward of $800 million in bonds for up to 30 years by the Alabama Corrections Institutions Finance Authority with the debt service on these bonds to be paid from savings within the annual budget of the ADOC.

Bentley said paying for these new prisons won’t be a problem because they’ll be more efficient.

“With the new prisons that will be developed and the efficiency of those prisons, they will save us enough money to pay for those bond issues,” he said. “This will be done without costing the taxpayers any more money.”

Bentley was asked to described what he saw during the tour.

During the riot last Friday night, an inmate posted pictures and video on social media.

“It’s something to address every day,” Dunn said.

Dunn said every one who comes into the prison goes through a cell phone sensor.

“Everybody that comes in gets tested for that,” he said. “The CERT team makes searches, and officers do searches and shake downs. We’re constantly looking for all types of contraband, not just cell phones.”

Dunn said how the cell phones were brought into the prison is a part of the ongoing investigation.

Joyner to take next step