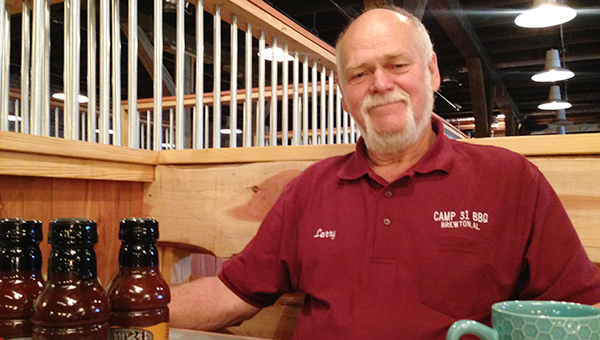 Camp 31 BBQ & Grill – Brewton’s newest restaurant – is a treat for the senses, offering a blend of history and taste. Located in the rear of the historic Hourglass building, owners Larry and Carolyn Murphy have transformed the former warehouse space using locally milled cedar into a 197-seat, three-meals-a-day restaurant.

Many may recognize the “Camp 31” name from its previous days as a barbecue staple in Brewton. Established in 1985, Murphy’s restaurant was defined by a signature sauce (“Created by my wife,” Murphy said.) and succulent meat. With the help of the Brewton Police Department, the Camp 31 crew entered its first competition – and the rest, as they say, is history.

In the years since the local store’s closure, the Murphys have traveled the U.S., participating in competitions and eventually opening a store in Paris, Ontario, Canada.  Recognized as one of the highest productive barbecue teams on the road today, Murphy said he knew it was time to bring his “slow-smoked” technique back home.

“I tell people I traveled so much that I didn’t need a map,” Larry Murphy said. “But I know where home is – Brewton. Business in Canada was very good, and I recently sold out to my partner. That’s when I decided to invest here.”

Murphy said “the stars lined up” to lead him to his new location.

“I never woke up one morning and said, ‘I’m going to buy the Hourglass,’” he said. “But I felt like I needed to keep busy. I believe if you enjoy what you do, it’s not work. Sure, you’ve got to get paid, but if you’re not doing what you enjoy, you’re going to be miserable.

“Me, I love making barbecue,” he said.

But don’t think that’s the only thing on the menu. Manning the kitchen is Chef Adam Manasco, who will bring a unique flair to the menu, Murphy said.

“I call it frou-frou food,” he said with a laugh. “I know everyone doesn’t like barbecue, so I wanted the menu to offer something for everyone – chicken, fish, steaks, you name it.

“Chef does a great job, too with desserts and the like,” Murphy said. “We want to capitalize on that for a great food experience.”

Murphy said plans are to add a daily lunch special and expanded menu in the months to come.

The facility also offers catering and event services, he said.

“I never considered myself a cook,” Murphy said. “I worked for A&P for years in production. I always asked myself, ‘Is it in me to do it?’ when I looked at a project.

“That’s what I’m doing today,” he said. “I want this to be about dining diversity. We’re not just barbecue. We’re the whole works.”