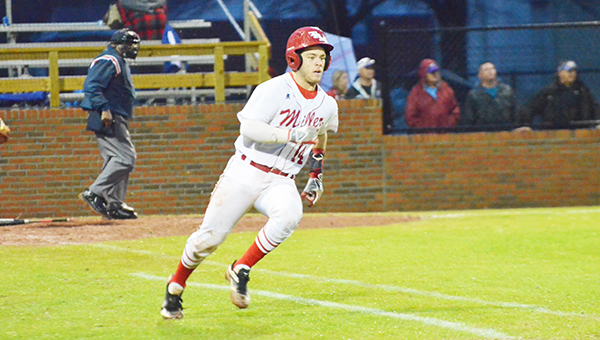 Corey Williams| The Brewton Standard
Miller’s Hunter Brittain looks to round first base after a hit against Fairview.

In a double-header matchup at home, the T.R. Miller Tigers defeated Fairview in both games, winning game one, 5-1, and game two, 6-0, to remain undefeated at home for the season.

After the game, T.R. Miller head baseball coach Kevin Madden said timely hitting was tough to come by against Fairview.

“Good pitching and good defense was the key to winning against Fairview,” Madden said. “We left a lot of runners in scoring position and just couldn’t get the big hits to put (Fairview) away.”

The Tigers scored in the bottom of the first inning with an RBI single by Jo Jo Booker.

With the score 3-0 in the bottom of the fourth inning, right fielder Joshua Winton connected for a single to plate a run, and increase the lead.

At the top of the sixth inning, Fairview got in the score column off an RBI single to the outfield.

The Tigers rebounded with an RBI double by Konsler to take the 5-1 lead.

Booker went the complete game on the mound for Miller, allowing one run, on one hit, with 13 strikeouts.

Brittain led Miller at the plate with three hits. Floyd, Konsler and Jake Najor each had two hits. Booker, Joshua Winton and Jordan Williams each had a hit.

Miller got on the board in the second inning with an RBI double by Booker. Joshua Winton singled later in the inning to plate another run.

In the third inning the Tigers scored three runs with a sac fly to the outfield by Floyd and an RBI double by Konsler.

In the sixth inning Caleb Winton singled a line drive to the outfield for an RBI.

Booker and Brittain led the Tigers with two hits each. Konsler led the team with two RBIs.

Madden said he is happy with his team’s progress so far this season, but still feels there is still room for improvement.

“I still don’t think we have played our best baseball,,” Madden said. “We have to continue to learn from our mistakes and start minimizing those before we start playoffs. I feel if we continue to focus on details we will be better prepared once playoffs get here.”